Shantaram is back and better than ever! There are a lot of incredible moments, especially for Kavita, played by Sujaya Dasgupta. Last week, we saw her begin to make her mark as a journalist, which is something that was a long time coming. It not only has an impact on her career, but on her as a person.

“It's the first time we properly see Kavita, who's my character, and how she plays in this whole series and the start of her journey in this whole show,” Dasgupta told SciFi Vision. “She kind of lands with a big kind of blast. She's really hungry for a story and very eager to make her mark as a journalist.”

She went on to say that Kavita will continue to dig around for more as the season goes on, all while she tries to prove herself in the world of journalism. “I'm really excited to see where she can go,” she added, although she admits that there are several places the writers can take the character, especially since we only saw glimpses of her in the books.

For more, read the full transcript below.

SCIFI VISION:  So, tell me a little bit about this episode. I'm so excited about it.

SUJAYA DASGUPTA:   It's a it's a good one, it's the first time we properly see Kavita, who's my character, and how she plays in this whole series and the start of her journey in this whole show. She kind of lands with a big kind of blast. She's really hungry for a story and very eager to make her mark as a journalist. So, this is kind of the start of where she begins the the journey of finding out what there is to Lin (Charlie Hunnam) and who he is and where he's come from and starts to dig around a bit, because she wants a story that will prove herself in this industry and elevate her from writing these trivial pieces about celebrities that she's found herself in trapped in. So, that's where we meet her at this point of the show today.

Wonderful. How did you prepare for her? Did you talk to other journalists to prepare? Did you do research on journalism and in covering stories? 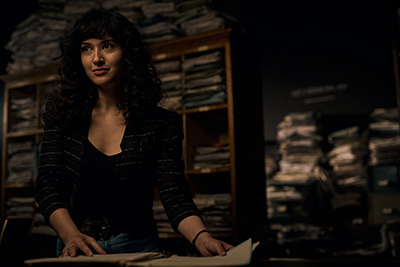 Yeah, I did. I did a lot of research on female journalists of the time, especially those who were writing in the 80s and then before that, and then really how journalism developed in India, kind of from the start of print journalism, as well. I read some books on accounts from female journalists and their personal accounts of how they found it, working in a very male dominated industry, which it still is, but it was especially so back then. So, I did a lot of research on that, and who was writing for who, what publications were out, what were the bigger publications in India, especially Mumbai. So, I did all of that and really looked at who were the prevalent female writers back then.

And what would you say was the biggest challenge about playing this role, as a whole?

Well, her arc and her journey in this whole show is incredibly exciting. She has a really big arc in this, so for an actor, to play this kind of journey is very exciting. But I think you kind of get get to grips with the emotional demands of it sometimes. And physically, we were doing it during COVID, which I think presented many challenges to this show. It's just a testament of how hard everyone worked to get this done. I think that kind of played a part in all of our preparation for the roles we took on in this. You know, a lot of it was isolated work, but, in that way, we got to do more intense work, especially for me. I got to do a lot more intense work on the character than I maybe normally would have on other roles. So, that was really beneficial for me. But it was all fun, whatever challenges kind of were thrown at you; it was always counteracted with the fun and the sense of fulfillment you got after it.

In what ways do you think you relate to her, and if not, if you don't, which characteristics you wish you had?

Gosh, I think I always feel like I want characteristics of all the characters that I play. They're always people that I wish I was friends with in real life. I think we're similar in the way we have a very strong work ethic. I think we both feel the need to prove ourselves, but where we differ, I think, it's [that] she's very outspoken. She's ruthless in a lot of ways, and she's incredibly brave in in a lot of ways that I wish I was as well. So, those are some of the characteristics that I wish I had, especially how she kind of takes no prisoners, and I wish I had more of that in my personal life as well, you know, being Sujaya. So, I learned a lot from playing her, and I loved her sense of self-assurance and competence, knowing the challenges she faces as a woman in this industry and Mumbai in the 80s but never wanting to hear the word “no.” If she wants something, she will go and get it, and she's very fearless, which I love.

And where do you see her going in the future? We're seeing so much happening this episode…It seems like she's so strong and so incredible. I can't wait to see what happens now.

I know, me too. I think with someone like Kavita, because we only really saw glimpses of her in the book, I think the adaptation allows a whole new journey that she can go on, and you can kind of take her anywhere. She can be entwined and interlace herself with Lin's journey or any other character’s journeys in the whole story. So, I think that's really exciting, because she's not kind of, I guess, restricted; she doesn't have to keep to the confines of the book’s narrative. Whatever the writers want to do and where they want to take her, they can. So, yeah, I'm really excited to see where she can go.

Who are some people in the future that you want to see her work with, like any guest star, I should say?

Oh, gosh. That's such a good question. Oh, gosh, just any kind of badass female, like, just anyone who's willing to be as fearless and ruthless as her and who isn't scared to go after a story and help her kind of do some detective work and dig things up. But I can't think of any names that spring to mind. Yeah, just someone like that. That'll be really cool.

Yeah, I could see so many, but I can't think of anyone want to see right now. I definitely want to see some other badass women on the show, to be a mentor or something, maybe like a actual journalist that is in the world, like Barbara Walters or something.

Yeah, and that would be really cool, because they can come in as a mentor, like you said, and just develop a partnership, which I think could be so cool, because you get to see her challenged by someone who she looks up to as well. So, that would be a really fun, spicy kind of relationship, I think.

Yes. I would love to see that happen. Wonderful. Speaking of role models, who are some of yours, in terms of acting, in terms of journalism now, in terms of life itself?

Yeah, I think right now in India, Barkha Dutt is a really wonderful journalist. There's been a big overhaul in who presents the news and is writing really cutting edge pieces, and there are a lot more women out there doing that. And in terms of like, real life, I always look at the women in my life as a personal influence. I did base Kavita on not just some journalists that I studied, but an actress for her accent, but also the women that I grew up with, because, I grew up with a lot of strong Indian women who were powerful. I think a lot of stereotypes can be put on Indian women or South Asian women as being subservient or quiet and reserved, but for me, growing up, the women were so outspoken, you know, powerful, would speak their minds, and they weren't scared. So, I love that. There is this woman on screen that we can see represents that and that Indian woman and that kind of sense of modern Indian women as well, because I just don't see enough of those kind of roles out there at all to represent people that I grew up with and women that I grew up idolizing as well.
Twitter
BotonSocial por: SocialEmpresa
Category: Interviews