With its new series, Dangerous Liaisons, Starz takes on a well-known story from a fresh new angle.

The show, which premieres tonight, was inspired by the 1782 novel Les Liaisons Dangereuses, a tale of seduction, secrets, and revenge among the French aristocracy. The original story centers on the Marquise de Merteuil and the Vicomte de Valmont, cruel ex-lovers who concoct a scheme to ruin other people’s lives and destroy themselves in the process. The novel has been adapted dozens of times including two recent feature films: 1988’s Oscar-winning Dangerous Liaisons and 1999’s Cruel Intentions.

The new show is not a remake or an adaption so much as it is a prequel, imagining how happy couple Camille and Pascal (Australian actors Alice Englert and Nicholas Denton) become vengeful social climbers determined to get what they want. Pascal is obsessed with reclaiming the title and fortune his stepmother stole from him, while Camille seeks power in a man’s world. 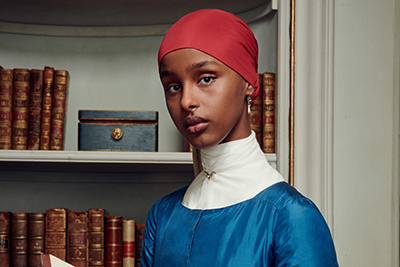 In tonight’s episode (the first of eight), Camille and Pascal are happily in love but facing a few problems: he’s poor; she is a sex worker in debt to her madam. The only person who knows about their affair is her maid, Victoire. Much more than Camille’s best friend, Victoire is also her partner in crime, using her wit, wiles and bravery to discover information Camille can use.

Last week, SciFi Vision spoke with the actress who plays Victoire, Kosar Ali (Rocks).  “She really is a detective,” Ali told us. “She has a knack for something and just has to get to the bottom of it. Essentially, she's kind of the catalyst of the show due to her detective behaviors, but she's also just a very beautiful, humorous, cheeky character [who] brings a lot of joy and grounding to the series.”

Watch the video to hear Ali discuss why Victoire is so driven, what’s at the heart of her friendship with Camille, and more.

Dangerous Liaisons premieres tonight at 8:00 pm ET/PT on Starz in the US and Canada, with new episodes each Sunday.