Tomorrow, AMC+ and Sundance Now premiere the new thrilling UK series The Suspect, based on the bestselling novel by crime writer Michael Robotham. The series follows Doctor Joe O’Loughlin, played by Aidan Turner, a clinical psychologist who seems to have the perfect career and perfect life. He’s even a hero after saving a would-be jumper from the hospital where he works. However, his life is suddenly turned upside down when he’s diagnosed with early onset Parkinson’s Disease.

When a woman’s body is found in a shallow grave in the cemetery that could be a murder or suicide, DI Vincent Ruiz (Shaun Parkes) and DS Rita Devi (Anjli Mohindra) come to O’Loughlin for his expertise, and he’s happy to help. But as they dig deeper into the investigation, unsettling questions arise about O’Loughlin. Is he hiding something? Does his recent diagnosis explain his behavior, or could he be involved?

To promote the series, star Turner spoke with SciFi Vision recently about working on The Suspect, including filming the opening scene on the ledge of a building, research and preparation into the role, and more. 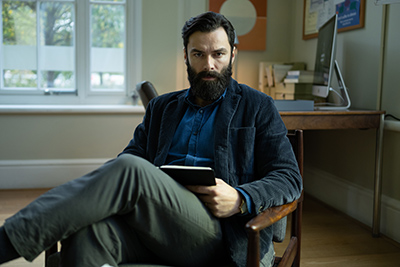 Read the full transcript below, and be sure to check out the series; all five episodes are available to stream starting tomorrow on AMC+ and Sundance Now.

SCIFI VISION:  First, I want to talk about filming that opening scene. I mean, obviously, you're not really up on top of the building, but it's still looked pretty freaky and scary to do.

AIDAN TURNER:   I mean, I'm on top of some kind of building. What we did was, there were three days where we had stunt guys that were up doing what they do brilliantly on harnesses up to fifteen stories, somewhere in Westminster. Westminster College, I believe it was. But what we did for our bit was we built the top two floors on a lot. So, there's no green screen; it is us. We are really swinging and we're up about, I don't know, I think it's like twelve or fifteen feet, enough to kind of have a bad accident happen, [laughs] not enough for certain death, with the crash pads and everything. But yeah, I mean, it was fun. It was it was a lot of fun to do, and I think it's a dramatic opening to a show. It kind of kicks it off too where you’re just trying to figure this Joe guy out, like, what is he all about? Where does this sort of nerve and courage come from? Is this what he's all about anyway? And then we sort of see, maybe he's not. Then, when it gets revealed about his illness, we think, “Is it the illness? Is it something else? What's his agenda?” And I think that was the interesting thing, when I read the first two, three scripts, was this ambiguity. My favorite thing is reading scripts and trying to figure out what the protagonist is about, and why they're making the decisions they're making. What about that lie? Is that a lie? That other person thinks you're lying, but what is the truth then, and what are you trying to cover up? There was a lot of that the first couple of episodes that really drew me into Joe, and it all kicked off by that very first scene when he's  being quite brave and stepping out to save this young lad.

Yeah, I met up with a chap called Drew Hallam, who was diagnosed. He's thirty-nine now, the same age as myself, and he was diagnosed with early onset Parkinson's at thirty-five, and, unfortunately, it's progressed quite quickly, but he's dealing with it very well. I think he's a wonderful person. We sat down many times to talk about his illness, because I've never seen it. I mean, I think it's been a couple of times in different shows, but I've never really seen it being portrayed on screen. So, [it was] something that we felt we needed to get right. The discussions are really interesting. The big thing I got from it too is just the wide spectrum of how the illness works, and people feel different things at different times, and it progresses at different stages for different people. For Drew, I think, initially, the tremors were quite bad. He has something called a DBS machine that he uses, this amazing piece of technology that's almost like a pacemaker. It pulsates. It sends pulse signals to his brain and allows him to manage his tremors a lot more. So, he would turn it up and down in some of the meetings just to show me how bad the tremors would get. It was really quite frightening, actually. Then, he would turn it back down, and it would almost disappear. And that with medication he would use a lot. So, we were sort of talking about Joe's mental state and where would Joe be, having been diagnosed, and how Drew was, and what Drew was feeling. What was his mental state? Something that comes with Parkinson's for some people is this feeling of this impulsiveness and making impulsive decisions, not just because of the shock and trauma of the illness, but actually the illness itself. So, we're sort of playing with that a little bit, what the medication does to you sometimes. So, that was just an interesting way, I think, to open a show with a protagonist character, because you're thinking, you know, “Is it because of the illness that he's making these decisions? Is it something else? Or what is he covering up? What are some of these lies, and what are the reasons for them?” So, yeah, meeting up with Drew was huge for us, because even [the] small physical things we just wanted to get, right. So, I would work with Drew a lot on just what the tremors look like. I would show him, and he would give me some notes on it too. I would sometimes speak to him on set, and before we’d do a scene just go, “Does this track for you? Does this seem real?” And he'd have notes on that too…He was great and has become a friend.

There're also a couple of psychologists I spoke to, just in preparation for Joe, that I found really interesting, and just books and different things. I didn't have a lot of time to prep for this job. I had some time, but I felt I didn't have that kind of laissez faire, sometimes moments where you're like, “Oh, let's just read some books. [There] was like a very specific sort of set of research material. I would talk to the producers and go, “What are you reading? What should I read? What do I need to watch? What do we need to talk about? Who do we need to meet?” So, we kind of hit the ground running, I think, on this one.

It looked really realistic. I was going to ask, though, is it hard to continually shake like that? I feel like it would make me, at least, really, really restless doing that.

Yeah, it's a funny one. It's one of those weird things; I've had it before with with different things. I haven't heard many actors talk about it, but I’m almost sure they would agree with me. It's noticed; you feel it at the beginning. You feel you're doing it, and then it goes away. And it's kind of quite scary, because then you don't think about it anymore, and it's just happening. It's still there. I wouldn't do it between takes, unless I'm very much doing it in the take itself, and it would feel like this would help me to just stay in it. Then, you would stop doing it, and you would want to do it again. There's a certain ease that comes with it. It feels a part of you afterwards. I think when you do anything like that, I think it's a thing you just your body remembers it and wants to do it again, and it became something that felt very natural for me to do it. So, yeah, I don't know. It was just one of those things. I think if you do it long enough, your body just remembers it and goes, “Okay, we're doing this now. So, let's do it.” 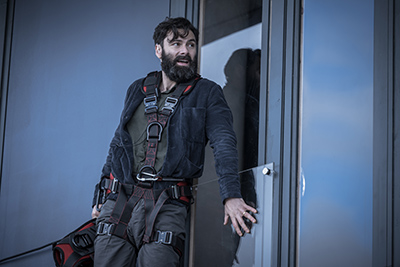 I know he’s not exactly a detective in this, but he is figuring the things out. Did you do any preparation in the sense of talking to detectives or that kind of thing to help you?

Not detectives, no. I mean, I kind of left that up to Shaun Parkes and Anjli Mohindra who played the detectives; they had certainly done that. I felt like Joe was on the fly here a little bit as this pseudo detective guy come late in the series. So, I sort of felt like, “I don't want to know too much. I don't want to know the tricks.” I wanted to go from a psychological point of view, as the psychologist stepping into this, like, what would he do? And I felt I had enough information from what I had garnered from some of the meetings with the psychologists, and they knew the story. They had read the scripts. But I didn't want him to get into cop mode, and I feel like sometimes you tread across some of these boards, and you can't unknow the stuff that you already know. I felt like he might just get a little too, I don't know, smart or clever about his method. If that's the case, I wanted to still be sort of like coming up for air a little bit and still trying to figure these things out. And as a psychologist, he will make the moves that maybe even top detectives would make, but certainly not being a detective or a cop or having that experience will also lead him away from maybe some of the more obvious points. So, I wanted to keep that sort of fresh. So, there wasn't any inclination to talk to any detectives for this one, but again, a psychologist certainly. Their advice, their points, were great.

He ended up doing better than they did with the detective work at any rate.

Yeah, I know. I know. I sort of wanted them to be smarter in some ways. I mean, maybe for series two they can [laughs] up their game a little bit.

Does that mean there will be a series two [for sure] since you mentioned it?

I don't know. I don't know is the thing. I have no idea. We haven't been asked us about it yet, but it certainly could be a thing. Yeah, for sure.
Twitter
BotonSocial por: SocialEmpresa
Category: Interviews