Tonight, Syfy premieres an all new episode of its hit series, Resident Alien. On Monday, SciFi Vision talked to star Alan Tudyk and creator and executive producer Chris Sheridan during a roundtable about the back half of season two. In the upcoming episodes, Harry deals with mortality as he continues to become more human as he develops more emotions. Harry is never comfortable with those emotions, and Tudyk talked to the site about the possibility of Harry coming to accepting those changes in himself.

“I'm sure he'll come to some understanding of it as he goes on,” the actor told SciFi Vision. “It’s also new to him right now. Emotions can sort of catch him off guard coming out of him that it's just not something that he's used to feeling. They don't have them on his planet. So, as as time goes on, I'm sure he'll get used to it, maybe coping with it like humans do…I think [it’s] just like humans; we have emotions, and they catch us off guard…As far as his his relationship with being human, that's always going to be a little tricky.” 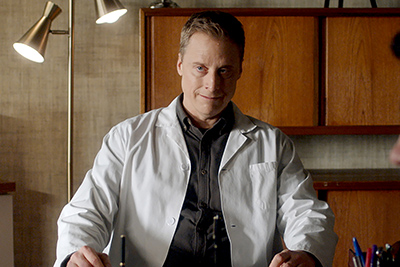 “I don’t think Harry likes the fact, especially in the beginning, hates the fact that he has these emotions,” added Sheridan. [He] even references them as sort of a disease, a poison inside of him and humans, but I think this season, he's getting to the point where I think it's harder and harder for himself to admit that he's not being changed.”

Sheridan continued that at the beginning Harry only cared for Asta (Sara Tomko), but that is changing. “It's very clear by his actions, he's starting to care about other people as well,” explained the creator. “He won't really admit it to himself, and I think the next sort of level of his growth, the next step of his growth, probably, whenever it might happen, is going to be the realization that he has to admit to himself, ‘Okay, maybe I do love people outside of Asta; maybe it's not just Asta.’ As soon as he admits that to himself, I think there's a big shift, because when does that end? Like, maybe there's another person or two in town that he starts to like, and once he admits that to himself, does that mean, ‘I'm eventually going to like everybody. Can I not stop this?’ So, I think that's the next step for him. It's begrudging. He's accepting it, but gradually, but I think he's still in denial about it.

“And like Alan said, in the same way that, as humans, often with our emotions we always try to tell ourselves we don't feel a certain thing…I think we try to talk ourselves into believing what we want to believe about how we feel about life and about people and, and the reality is emotions happen to you whether you want them to or not, and I think Harry is realizing that he's really a victim of them, in the same way that we all are.”

Sheridan continued that Harry will learn that having emotions isn’t necessarily a bad thing and can make you stronger.

Be sure to watch the interview below and tune in to an all-new episode, tonight on, Syfy.