Created by Stephen Merchant and Elgin James, Friday, Prime Video released season two of the crime thriller comedy series from the UK, The Outlaws. The series follows seven strangers working off a community service sentence in Bristol. The group discovered a bag of money in season one, and in season two they must work together to outwit a drug dealer after they are threatened.

Gamba Cole plays the role of Ben Eastfield. The actor recently talked to SciFi Vision in an exclusive interview and teased a bit about where Ben is at this season. “Season two for [Ben] is about the discovery of himself and his dreams, [and] what he wants to do and never really got the opportunity to,” explained the actor, “because he was so fixated on looking after Esme (Aiyana Goodfellow) and making sure that she had opportunities and that she was able to do more than he was, but for him, now, he's allowed to be a little bit selfish, in a way, and he really wants to include Rani (Rhianne Barreto) in that.” 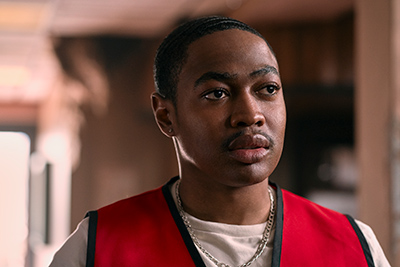 The series does a fantastic job of being dramatic but also very funny. Cole enjoys the comedic part the most, yet he finds it the most challenging, and he’s always asking questions. “Working with Stephen and like Christopher [Walken] and Jess [Gunning] and Darren [Boyd] who are just naturally so hilarious, you do watch and you do think ‘How do you do it like that? How is it so effortless?’ Me, I like to ask questions, and I always want to learn. I'm a student in this, so I'm happy to always ask questions and try and figure out new techniques and ways to sort of make it easier for myself. I think everybody's comedic timing is different; [it’s] like a specialized skill.”

“There're a ton of things that I learned from the [cast],” continued Cole, saying that he was honored to get to work with them. “Growing up watching people like Christopher and seeing Stephen on the television beforehand, and then being able to call them and speak to them and go out away from work and actually talk to them about just the industry and how things work…how they make their choices and how they discover those little those little gems in their characters, that's something that I definitely spoke to them about and asked them about. Choices are important and how it feeds the story.”

The actor also discussed with SciFi Vision the difficulties in filming two seasons at once and often out of order, which the actors as well as directors were a help with.

During the interview Cole also talked about Ben’s relationship with Rani in season two, how his character had to come to terms with dealing drugs, and much more. Watch season two now on Prime Video and check out the full interview below, but beware, there are spoilers for the full season.