Today, the new series, Shining Girls, based on the best-selling novel of the same name by Lauren Beukes, premieres on Apple TV+. The series follows Kirby Mazrachi (Elisabeth Moss), who after a traumatic assault where her attacker was never found, is left in an ever-changing reality. Years after the attack, her world is upended when she realizes a recent murder victim suffered identical injuries to her own. Kirby, now an archivist working at a newspaper after putting her career on hold, enlists the help of reporter Dan Velazquez (Wagner Moura) to identify her attacker and understand the shifting world around her.

The eight-episode series is a thriller but also involves science fiction elements. Executive producer Michelle MacLaren, who also directed some of the episodes, loved the “genre bending” of the project, which was new for her. “I always feel it's fun to take on things I haven't done before that I find challenging and a little bit scary,” MacLaren told SciFi VIsion. “It had all those factors involved, and so I was very fortunate to say, ‘yes,’ and also it was Apple TV plus that was making it, who I love working with.” 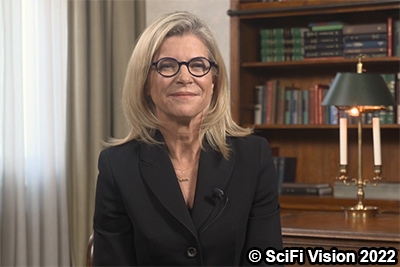 The episodes feature multiple time shifts, which is meant to be confusing at first. “I would say that in the first two episodes,” said MacLaren, “…we wanted it to be ambiguous, because her life is constantly shifting, and it's unbalancing. We want you to experience the show mostly through the eyes of the character of Kirby, so it's very subjective from her point of view, and her life is unbalanced…So, the ambiguity we hope interests and excites audiences and they find it a mystery and try to figure out what is not only going on in the show, as in who killed these women, but also what's going on in her mind.”

MacLaren added they wanted to keep the time shifts “real and grounded and not too fantastical.”

During the interview, the director also talked about other directors’ who influenced the style she used in the series and teased one of her favorite scenes. Be sure to watch the full interview below and watch the first three episodes Shining Girls, available to stream starting today on Apple TV+ with subsequent episodes released every Friday. Also, stay tuned for our interview with star Jamie Bell.