Yesterday, Amazon released season two of the animated dramedy Undone. The series, which comes from creators Kate Purdy and Raphael Bob-Waksberg, stars Rosa Salazar as Alma, who lives in Texas with her mother, Camila (Constance Marie), and sister, Becca (Angelique Cabral). In season one, after a car accident, Rosa finds herself with the ability to move through time, which she uses to find the truth about her father (Bob Odenkirks)’s death. In season two, Rosa convinces her reluctant sister to help her uncover more truth of their past.

SciFi Vision recently spoke to Marie and Cabral as part of a roundtable interview to promote the series, where we asked the actresses about the parts in the characters they felt were the easiest and most difficult to connect to.

“The easiest part for me to connect to Becca is her kind of good girl, uptight side,” said Cabral. “Then, where I am in my life personally as a mother in this industry post COVID, all of it is kind of like the not giving a crap and just fully leaning into the things I want to know and care about. I think that that's where Becca ends up in this season, just kind of like throwing abandon to the [wind] and just going all in.” 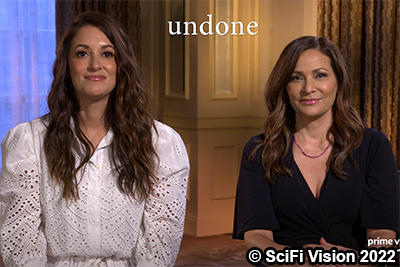 The actress added that the hardest part was that she never really confronted her parents, especially her mother, like her character. “I'm a mama's girl. I was raised by my mom. So, that part, to me, was weirdly a little tricky, and I had to kind of discover that.”

Marie, on the other hand, talked about the difficulties in playing some of the traumas that Camila faces. “For me, it was [that] Camila has to deal with some heavy loss, some heavy realizations, some heavy mistakes, and choices that she's made that have huge impact on her herself, her emotions, her family,” the actress told SciFi Vision. “That was kind of a hard place to live, as an actor, to embody all of these things.”

“It made me love her so much more,” Marie added, “because she survived a lot of the traumas and things that were given to her generationally…You really embrace her and realize that broken people don't start off broken. Life happens to them, and that's what breaks them, and then you have compassion for them. Then, maybe next time you see them behaving in a way that might not be your favorite way, you're like, ‘Oh, yeah, but I get where they're coming from. I don't have to agree, but I have compassion and understanding for their journey.’”

During the interview Marie also teased a bit about some of what it is Camila deals with this season. “So much is revealed of the history of Camila and what she's endured and how much she's suffered,” said the actress, “and generationally from her own family and the losses that she's had to deal with and what shaped her into the survivor that she is and how she had to muscle through no matter what.” 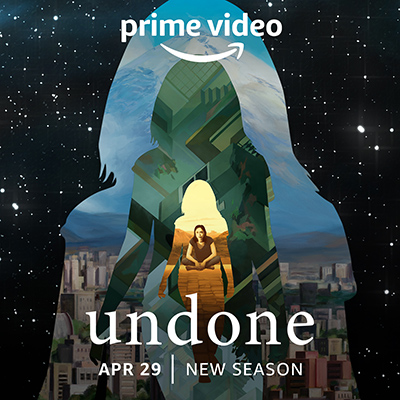 “In season two, [Becca]’s on Alma’s side,” teased Cabral about her character, “and when she discovers her powers, she's all in…I think up until then, you never really saw Becca being like a bad girl. And those scenes where we confront Mom, and we're like, ‘We know best,’ and we go on this hunt to find out, I think it's so telling of a sibling relationship.”

“It’s a crazy evolution,” added Marie, “especially [how] Alma was trying to protect her father and help her father [last season]. This season both girls are trying to help me and figure out what's going on with me and champion my character. It’s like they're the dynamic duo of therapy rotoscoping adventures, and they're going to unearth all the secrets of our family, and that really makes for such interesting television.”

One of the things the series is known for is that unique animation style using rotoscoping techniques. “It's both incredibly difficult, and I would say an acquired taste,” explained Cabral. “It's maybe not for every actor, but it's also incredibly fulfilling…It allows you to just kind of be free from all distractions on set, and you really just dive into the character, the words on the page, your journey. It's almost meditative, because you have to just imagine so much, and it's all visual in your mind of what's going on around you, and it's exhilarating…Then, when you see the final product, it's genius.”

During the interview, the performers also talked a bit about what it means to them being able to represent the Latinx community in a science fiction series. “It's truly thrilling,” said Cabral. It feels groundbreaking.”

“I am just so happy we have finally arrived [at] the future and that we can represent and also pave the way for younger people of color to see themselves in the future,” added Marie.

For more, watch our portion of the interview below, and be sure to watch season two of Undone, now available to stream on Prime Video. Also, stay tuned for our interview with the creators of the series.