Amazon’s Outer Range blends both Western elements with the supernatural. The series tells the tale of Royal Abbott (Josh Brolin) and his family’s battle with a rival family, the Tillersons, who are trying to take their land. When Abbott finds a mysterious void in the pasture of his ranch, everything changes.

Shaun Sipos, who plays the character of Luke Tillerson, was attracted to the series partially because of the Western genre. “I've always loved that genre,” Sipos told SciFi Vision during a recent interview. “This is not your typical Western. You have a bit of genre bending here. You have a Western with a sci-fi element to it, about a rancher that finds a metaphysical hole on his property, and that really grabbed me. Also, this piece doesn't feel just like a TV show. It felt like a Western play in a way, and at its core, it's about family, and that really resonated.” 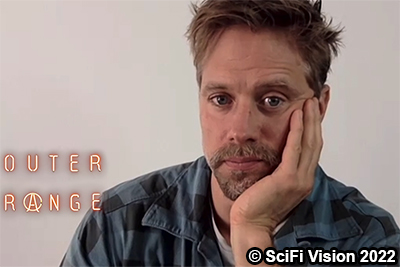 The actor said that in Westerns, there is a lot of “wonder,” which creator Brian Watkins talked about with them. He tried to bring in some of that from his own childhood “Brian talks about this sort of mantra…’uphold the wonder.’ I really went back into my own childhood and into my own life and looked at things as a child with wonder. I'm from Canada, where you can go up to the edge of the forest and look in, and it's a giant mystery. It's a whole other world that's in there, and that's what this show is like. So, I was really looking back into my own life and that wonderment.”

Sipos added that he also has seen a lot of Westerns which informed his portrayal as well.

For more, including the difficulties he faced in connecting with the character, working with Will Patton, who plays his father, and more, watch our interview below and be sure to check out Outer Range on Prime Video.