Blending a western saga with a supernatural mystery, Outer Range, which premieres today on Prime Video, tells the story of Royal Abbott (Josh Brolin) and his family as they struggle to keep their land. Things become much more complicated when Royal finds a mysterious void on his ranch and events begin to unfold.

Containing elements of drama, humor, westerns, and science fiction, creator Brian Watkins, who recently spoke with SciFi Vision in an exclusive interview, said that it’s the emotional aspect of the series that joins everything together. “I feel like the sci-fi in the show we always try to tell people is meant to be not extraterrestrial, but terrestrial, very kind of, of the earth,” said Watkins. “In that way,” he continued, “I think the blending of it only blends when we're feeling something about the characters, and hopefully, those are things that we can relate to. 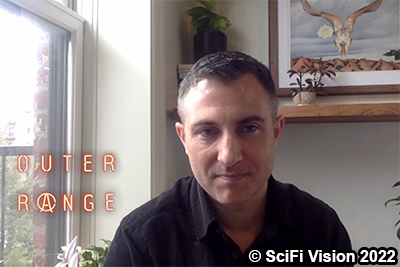 “The show really tries to explore, what does it feel like when the otherworldly or when the unknown comes knocking at your front door or at your kitchen table or in your backyard? Hopefully, the emotional core of the show really pulls all those things together.”

During the interview the creator revealed that both the pandemic and the weather made shooting the series more difficult, it also helped them get closer. “We bonded in a beautiful way and became quite a family as a cast,” said Watkins.

For more, watch the full interview below, and be sure to watch Outer Range, now available on Prime Video.