Recently, it became a lot easier in the US to stream all things Taskmaster, when at the beginning of the month, Taskmaster Supermax+ streaming service became available. Today the first episode of season nine of the series drops, soon to be followed by the rollout of subsequent seasons, as well as international versions. Having their own streaming service rather than being hosted allowed more control, according to creator and star Alex Horne, who spoke with SciFi Vision in an exclusive interview last week. “Everything's going to be in one place,” said Horne, “no adverts, and all the ones from around the world. So, it's all there, and it just means that we're in control of it. They will still go up on YouTube for free, but it just seems like this way, we don't have to bother with any other middleman.” 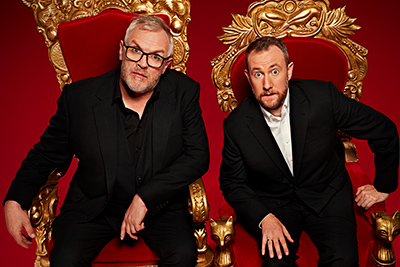 The streaming service will also allow them to show extras and unseen specials that have never been available. “It's basically a bin where we put all that stuff in,” said Horne.

“In any two or three-hour record, eighty-five percent of what I say gets removed, because I’ve said bad words.” quipped star and host Greg Davies. “So, I hope that they'll be uploading of really, really terrible language, huge swathes of bad language. That's a reason to sign up, isn't it?”

An international success broadcast in 94 countries, be sure to check out the hilarious British series Taskmaster, and watch our interview below for more from the two hosts, where we talk about British vs American humor, how new seasons will be rolled out, and much more!