SciFi Vision has been making the rounds at Chicago Med and had the chance to speak with series regulars Marlyne Barrett and Oliver Platt, who costar as two hospital veterans: charge nurse Maggie Campbell and Dr. Daniel Charles, head of psychiatry.

Both characters often act as teachers and mentors to their younger colleagues, but they come at it from different angles. We love watching Dr. Charles work with resident Vanessa Taylor, and we asked Platt about their working relationship. 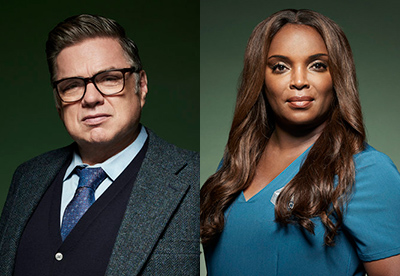 “Dr. Charles is [a mentor] just by nature of how long he's been around,” Platt explained. “He's a natural mentor, if you will, and somebody who maybe has, by nature of his training, extra insight into what's going on with people.”

Next we asked Barrett about Maggie’s relationship with Dr. Dylan Scott (Guy Lockard). In the last few episodes, Maggie has noticed that Scott can’t seem to leave his police training behind.

Barrett also pointed out that while Maggie and Dylan have much in common, she has a more direct approach “I think she's an ear to [Dylan] but a little different padding than Dr. Charles. I think Dr. Charles has that padded ear; he's so kind, gifted. Maggie's more of a barometer; in the ED this is how we behave. If you want to be stroked, go see Dr. Charles, but over here, this is how we behave, and you're not a cop.”

Watch the full conversation in the clip below. Chicago Med airs Wednesdays at 8/7c on NBC.