Apple TV+ calls the stories “darkly comic feminist fables,” which perfectly describes episode eight, “The Woman Who Was Fed by a Duck.” Merritt Wever (Nurse Jackie) stars as Elisa, a single woman who spends most days sitting beside a duck pond, studying for her med school entrance exam. She’s stuck in a bit of a rut until she meets a talking duck who might (or might not) be just what she’s looking for. 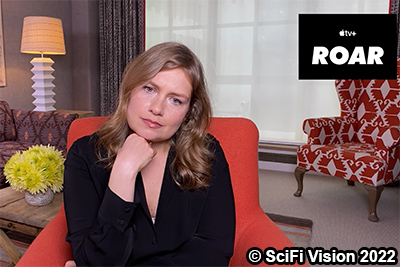 When SciFi Vision caught up with Wever at the Roar press junket, our first question was about the title. Fed by a duck?

We also asked Wever what other messages she took away from this story, and we couldn’t resist asking what it was like working with a live duck. Our chat contains mild spoilers, so be sure to watch the episode before clicking the video below.