Recently, to promote the new series Halo, SciFi Vision took part in a roundtable interview with some of the cast, including stars Natascha McElhone, who plays Dr. Catherine Halsey, and Olive Gray, who plays her daughter, Miranda Keyes. Both of the actresses had known about the Halo franchise long before taking on the role. “I was first introduced to it twenty years ago,” said McElhone to SciFi Vision, “my husband used to play it…but since then, my sons have also played it.”

Gray was first introduced to it through friends. “I was familiar with the game,” the performer told the site. “All of my friends were deeply intrigued entrenched in everything Halo, while I was a kind of teenager and just entering into my twenties. So, yeah, I was super aware of the game…and I know quite a bit about it via my friends.”

McElhone also talked with the site a bit about the fan base and how so many different types of people play the game. “It's got its diehard fans. It's been in competition in the last twenty years with lots of other games that have come onto platforms, but I am impressed with it staying power and the fact that it has such a devoted following. Then, it's a following of different generations, but it's not just the something that only existed for a couple of years and the scholar fan bases…It's quite a heterogeneous bunch who play it, which I like. It feels representative of the population.” 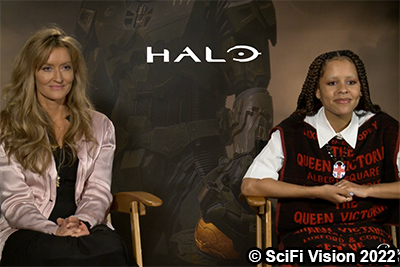 Although their characters were already known from the game, according to McElhone, they did get to add to it. “We did have a Halo bootcamp,” explained the actress, “and we did become very familiar with what it was that had been said about our characters before we came to make the TV show, but we were very much encouraged to come up with some themes and, I guess, relationship dynamics, but also ambitions and goals for our characters that I think we got very excited about.”

For Gray, it always starts with the script. “I think that there are certain elements, like [Miranda’s] courage and selflessness that is in the game that I think we see definitely in this show,” said Gray. “But I think, also, as an actor, when approaching a role, for me at least, I'm really looking at the script and what it says on that page and what on that page I can take and build on in order to create this character. So, I think that that's always going to be the starting point…[T]he script was kind of the guide in the darkness in a way for me.”

During the interview, the performers also touched on their characters’ dynamic. “I think our characters have very different versions of [their] relationship and different versions of culpability, if you like, and I think for Halsey, she was put on this earth to pursue one thing,” said McElhone. “She has been gifted with this ability not just to create and invent and be a terrific scientist, but also with the march against time that she feels that the human race is about to be destroyed. She wants to find the quickest route in order to ensure that that doesn't happen. She wants to defeat the covenant, so she's willing to do anything, a sort of short term pain long term gain, and has this kind of utilitarian attitude that it's [more] worthwhile saving billions of future generations than looking after the immediate biological progeny that she has. She just sees that, I think, as largely irrelevant.”

“I don't know how much influence Miranda has on Halsey in the way that she lives her life,” added Gray, “but I am certain that a great deal of who Miranda is, the way that she operates, the way that she approaches a lot of things within her environment is directly informed by the relationship that she has with Halsey and also the absence of that relationship. I think that's probably the hardest thing, actually, for Miranda in some ways, witnessing somebody who has such a deep impact on her and on her life story, watching that person not be greatly influenced by her existence.”

Be sure to watch our portion of the interview below and watch Halo on Paramount Plus.