The series Halo recently premiered on Paramount Plus and SciFi Vision took part in a roundtable interview with executive producer Steven Kane and executive producer Kiki Wolfkill, who is also a developer at 343 Industries on the Halo games. The two talked about creating the series and some of the similarities and differences to the original franchise.

We asked about balancing using the storyline from the game franchise and bringing in a new take on it. According to executive producer Steven Kane, they started organically with John’s story and his journey of self discovery. “From that point on, we were sort of committed to telling our own story that existed within the universe that people know Halo, and gave us a chance to to build out worlds, either some new ones, or in many cases, worlds that were canonical in a way that allowed fans who know the game to really get the chance to visit those places…and of course for people newly initiated into Halo, a chance to see new worlds for the first time at all. 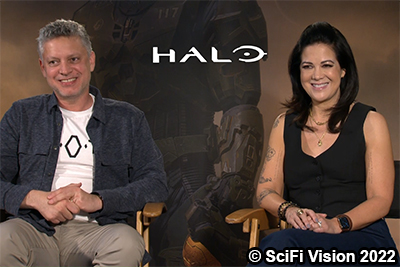 “So, we didn't consciously run away from retelling stuff from the games. We also realized why tell you the stuff you've seen in the games, when we can tell you a story of our own, and keep it in that same world and expand on the world of it…To the extent that we could bring in stuff that people would love from the games, we absolutely did, but at the same time, we focused on telling our story.”

Kane made a point that they collaborated creatively with game developer 343.

Kane also continued to talk a bit about Halsey (Natascha McElhone) and her ideas about AI. Be sure to hear all about it in our portion of the interview below and watch Halo on Paramount Plus.