Tomorrow HBO Max debuts season two of its sci-fi drama series Raised by Wolves. This season, Mother, played by Amanda Collin, Father, played by Abubakar Salim, and the children become part of an atheist colony in Kepler 22 b’s tropical zone run by the AI collective known as The Trust. On the surface, it may seem to be the kind of place they were looking for, but there may be more to it, according to Collin. “We finally landed in the tropical zone, which was part of the mission,” said the actress during a recent exclusive interview with Jamie Ruby of SciFi Vision. “It was part of the the goal from the beginning to start this colony in the tropical zone, and here we are, with a colony in the tropical zone, but it looks very different from what I'd imagined. So, there's this bouncing forth and back…this is what we've always wanted, even though I deep down, think I'm very well aware that there's something very wrong.” 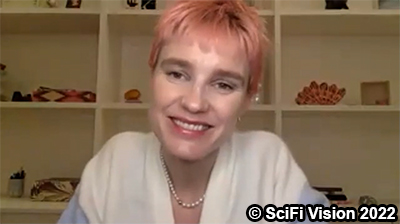 However, with all the children having their own tasks and there not being a need to hunt and gather resources, it gives Father more time on his own, said Salim during the interview. “[T]here’s something really interesting about the fact that now the kids are sort of in this space where they are being taken care of by the atheist sort of society, by The Trust. There is a lot less pressure of Father having to worry about the survival of these children, that he has the space in order to explore what he likes and what he does. I think that's something that Aaron [Guzikowski] has done really nicely and crafted really well with the journey of where Father's going in this world.”

During the interview the two leads also talked about working with stunts and special effects. Salim, who has a fun fight scene in an upcoming episode enjoyed the more physical scenes, but also what it means for Father. “It's also a really interesting journey for father to go through emotionally,” said Salim, “just because of the extremities of the fights and the kind of the madness that kind of follow through with it. It was such a great experience.” 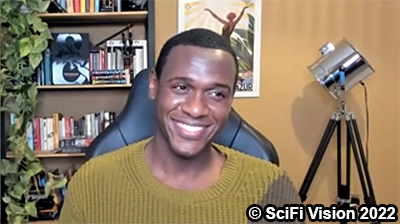 Collin has dealt a lot this season with having to act against special effects of things which are not really there, which she finds challenging. “It's definitely difficult. I think my acting skills are definitely put to the test when it comes to acting with a tennis ball. It's all about your attention span, really, and how much you can keep the imagination going…You put your trust in the director, and then you ask if he's got what he needs…I see it as a big learning experience, because essentially, it's so much fun.”

For more, be sure to check out the full video interview below, and stay tuned for another interview with the creator and other cast members, and watch Raised by Wolves season two, starting tomorrow on HBO Max.