Tomorrow, Syfy airs an all-new episode of its hit series, Resident Alien. In the second season of the series, rather than still trying to leave the planet, Harry’s goal is to protect Asta (Sara Tomko) from the other aliens who may be coming. During a recent roundtable interview, showrunner Chris Sheridan talked to Jamie Ruby of SciFi Vision about Harry’s need to learn empathy and to care about others. “He doesn't really care about everyone else dying,” said Sheridan. “He’s fine with that…It's just Asta he wants to protect, so journey-wise, what he needs to realize is what Asta is trying to hammer into him: you can't just be okay with me surviving. What about everybody [else]?...Harry doesn't understand the concept of that. He hasn't learned empathy yet; he hasn't learned this connectivity between human beings yet that we all - most of us - know inherently just by being kids and growing up in the playground.

“...So, his journey, especially in season two, is to learn empathy and to learn to love and to appreciate and care about people outside of Asta.” 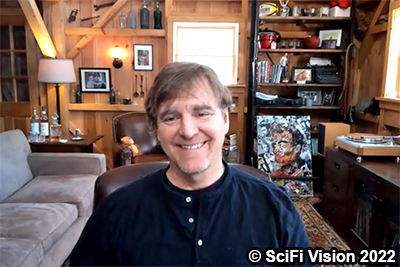 Sheridan also teased how Harry will go on a date with a woman named Caryln (Alex Borstein) this season, and hilarity ensues. “She's a scientist at New Mexico Tech,” said Sheridan. “She works in a lab and she happens to have something in her lab that Harry could use to help him in his quest to try to save Asta this season from the imminent danger. So, Harry takes her on a date and tries to woo her to get the thing from her that he wants. So, we get to see Alan Tudyk and Alex Borstein on a date together, which is absolutely hysterical.

During the interview the showrunner also talked about the expanded roles of some of the characters in season two, why the television series does not have as much true crime as the comics its based on, and more. For more, be sure to watch our portion of the interview and read the full transcript below. Also, don't forget to check out our recent interview with Alan Tudyk and Corey Reynolds, and stay tuned for our one with Sara Tomko and Alice Wetterlund.

QUESTION:  [In] season two, there’re a lot of things that are at stake. What is it that you would say, from a fan standpoint [we] should really be excited for?

CHRIS SHERIDAN:  Oh, there's so much to be excited for! Well, I have to say, one of the things to be excited for is the second season…the beginning of it is in summer. So, it's a whole new look for the show. It's Patience in summertime, which is awesome. We’ve got people on boats; we’ve got Harry in the water - I mean, there's a lot of fun stuff. Just visually, it's going to be different than season one. Then [there's] still the threat of imminent Earth destruction that Harry's trying to stop. It's Harry now on the side of Asta, trying to protect her, as opposed to making a decision whether to set off the bomb or not from season one. And…Harry has a roommate for a little while, in the form of an octopus. So, that's a fun dynamic as well.

QUESTION:  In the comic book series, there's a lot more true crime, versus this semi-comedy apocalyptic theme that we have going on, especially as we lead into season two. Can I ask why you've decided to move into that direction, more holistically overall?

CHRIS SHERIDAN:  As opposed to just the true crime stuff?

CHRIS SHERIDAN:  It's a great question. You know, when I was looking at the books, the comics, which I thought were brilliant, Peter Hogan and Steve Parkhouse are just incredible masters at that, and I fell in love with it, fell in love with the characters. There was one thing that I did not know how to do myself, and other other writers or creators maybe could do it, but there was something going on in the comics, which is each comic sort of had a murder, and there was a bit of them. And this show could have been that; it could have been more of a procedural, murder of the week type of thing, but I didn't know, as a writer, how to do that and still portray this town as a town anyone would want to live in, if there're that many murders going on. They did a great job in the comic going outside of town for the murders. We're sort of doing the same thing. As you go into season two, there is a sense that Patience has become a bit of a murder town, because not only was there the the murder of the doctor in the first season, but then this stuff happened in episode ten of season one. There was kidnappers; the doctor's missing. There is an aura of that, but it's all tied together. It feels more organic if it's tied together, as opposed to this person got murdered, and Harry's gonna solve it, and then oh, this other person got murdered; Harry's gonna solve it, and they're not connected. We've tried in the writers room to connect all these things together, so it feels all of one piece. So, that was the main reason why we did it that way. It's nothing against the comics. The comics do it brilliantly, and I love them, but it's a different genre; it's TV. So, to play it out this way, this is the only way I would know how to do it.

SCIFI VISION:  At the beginning when we start, obviously, Harry is not able to leave, which was kind of what the first season is about. So, can you tease a bit about his trajectory this season of where he's headed and what his goal is besides trying to save the planet? 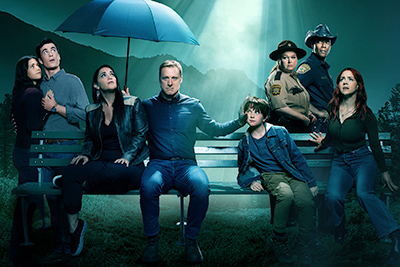 CHRIS SHERIDAN:  Yeah, I mean, his goal up top is to try to save Asta, really. He doesn't really care about everyone else dying. He's fine with that, as we'll find in the first couple episodes back. It's just Asta he wants to protect, so journey-wise, what he needs to realize is what Asta is trying to hammer into him: you can't just be okay with me surviving. What about everybody [else]? There're people who I care about. It's not just about me; I have Jay, I have my dad and my friends.  I'm not just me; I'm connected to all these people, and I love all these things, so if you protect me and everything else is gone, that's not a life that I want. So, Harry doesn't understand the concept of that. He hasn't learned empathy yet; he hasn't learned this connectivity between human beings yet that we all - most of us - know inherently just by being kids and growing up in the playground and throwing sand in another kid's face, and they start to cry, and you feel bad. You learn this empathy, like, “Oh, I don't like it when I make someone feel bad,” so then you stop throwing sand in kids' faces. As humans, we learn that as we grow up and we become adults, unless we're a sociopath. Hopefully, we have this empathy, and we can be kind to each other. Harry's a child; he hasn't learned that yet. So, his journey, especially in season two, is to learn empathy and to learn to love and to appreciate and care about people outside of Asta, that maybe you should love someone or care about them, because they're a human beings with wants and fears and loves themselves, and he hasn't quite gotten it yet.

So, his journey emotionally in season two is to gain empathy of other people. Then, at least in the first part of the season, while doing that, he's trying to protect Asta from this threat from above coming down. So, the question that the audience is is waiting to figure out as they watch is, is he going to be able to stop the people from coming?

QUESTION:  …We knew that Asta wanted Harry to go out and to socialize and to go forth. My question is for season two, I know there's a possibility, maybe a new love interest, can you talk a little bit about some of the newer characters that we're gonna be introduced to?

CHRIS SHERIDAN:  Sure. That's a great question. Alex Borstein is joining us for an episode. She plays Caryln, Kate Hawthorne, who is Ben Hawthorne (Levi Fiedler)'s wife, Kate Hawthorn's cousin. She comes to town. She's a scientist at New Mexico Tech. She works in a lab and she happens to have something in her lab that Harry could use to help him in his quest to try to save Asta this season from the imminent danger. So, Harry takes her on a date and tries to woo her to get the thing from her that he wants. So, we get to see Alan Tudyk and Alex Borstein on a date together, which is absolutely hysterical.

We tried to beef up some of the characters we had last year. We see a bit more the octopus this year with Nathan Fillion, who's incredible. We see Judy, Jenna Lamia, a little bit more, who's D'Arcy (Alice Wetterlund)'s friend. [We see] a little bit more Ellen, who is a nurse in the clinic played by Diana Bang. We expand a little bit on Kate Hawthorne's character, played Meredith Garretson. We're really trying to fill out the world a little bit in season two and make it even more three dimensional than it was before. There are people coming back. Linda Hamilton's coming back as Jenna McAllister. We'll have Terry O'Quinn back as the alien tracker. So, we're really trying to keep the world what it was, but try to expand it a little bit, make it more exciting.

QUESTION:  What character are you most excited that we get to learn more about in the second season that's not, of course, Harry or Asta?

CHRIS SHERIDAN:  Well, two people. I'm excited to bring Kate Hawthorne into the mix. I think Meredith Garretson adds a great flavor to the women on the show. She's another strong woman and plays a strong woman on the show, and it's great to see another element adding to Asta and Deputy Liv (Elizabeth Bowen) and D'Arcy. I'm excited to see more sides of D'Arcy this year. D'Arcy will have a love interest this year, which will be exciting to watch, and we'll see a little bit of a background and what Darcy's struggles are and why she is the way she is…We'll see a lot. We'll see a lot of Asta's journey. We've really tried to fill out the background of a lot of these characters. Also, Sheriff Mike will find out something from his past that sort of haunts him and will give him more of a three-dimensional character arc as well. So, there's a lot of really cool stuff coming.
Twitter
BotonSocial por: SocialEmpresa
Category: Interviews