Season three of Snowpiercer, which takes place on a gigantic, perpetually movie train circling the frozen earth, recently premiered its third season on TNT. At the start of the season, Bennett Knox is dealing with the loss of Melanie Cavill (Jennifer Connelly), according to Goldberg. “It's obviously a very difficult season for Bennett,” said the actor in an exclusive interview with Jamie Ruby of SciFi Vision, “I think he's dealing with a lot of emotions and frustrations, trying to process the loss of Melanie, the fact that she's not on the train.” 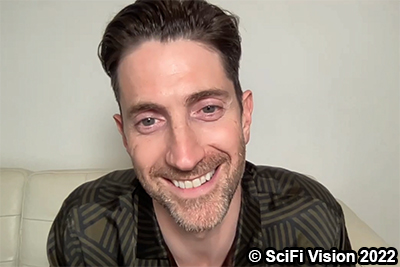 The actor, however, feels that it’s a great motivator for his character, as is having to be around more people. “And as as difficult as that is, for him, I think it's a great driving force and motivation for him to complete the mission that Melanie set out and started when she left the training in the in the second season…I think another great thing for him, as a motivation…is sharing his usual space that he's usually kind of alone in with loads of different characters. I think that, even though it's difficult, I think he kind of thrives on that kind of human interaction, and we get to see him interacting with very different people this year.”

Goldberg also touched on getting closer to another character this season as well as how Bennett views Alex Cavill (Rowan Blanchard), who his character thinks doesn't need a guardian and is “a badass in her own right.”

For the rest of the interview, be sure to watch the full video below, and tune into an all-new season of Snowpiercer, Mondays on TNT.
D
Twitter
BotonSocial por: SocialEmpresa
Category: Interviews