Tomorrow, the new series Reacher, based on the Jack Reacher novels by Lee Child, premieres on Prime Video. In the series, Malcolm Goodwin plays the role of Captain Oscar Finlay, Chief of Detectives at the Margrave Police Department, who ends up working with Reacher (Alan Ritchson). Goodwin is probably best known for his role as Detective Clive Babineaux in the CW series iZombie. According to the actor, who recently talked to Jamie Ruby of SciFi Vision in an exclusive interview, that role did affect the way he portrayed Finlay. “It definitely did inform this character in terms of just, [how] it felt like I was a police officer,” said Goodwin. “It felt like I really did it; it felt like I had a history of it. I'm not gonna lie…I feel like I saw the good seventy-two cases or whatever it was murder cases! So, yeah, just going through that, iZombie did help inform in terms of the knowledge that Finley would have going into the chief detective position.” 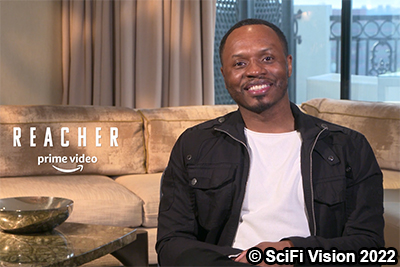 The actor admitted that he is into puzzles and figuring out mysteries, but would have a problem with the crime scenes. “I'm not gonna lie,” said Goodwin, “that's the part that I think I would suck at is going to crime scenes and seeing some terrible things. I would have to work on that, because it was even tough [to] mimic believe some of the crime scenes in [Reacher] where you're like, 'Oh my gosh, this looks so real.' I can't even look, and I know his not [real].”

One of the main things that drew the actor to the character, in addition to the showrunner, Nick Santora, who he had worked with in the past, was Finlay’s “strong sense of right or wrong” as well as his tenacity, according to Goodwin. “It was a guy trying to prove that he belongs in a position that he was trying to attain for so many years and that eluded him for twenty years. He just didn't give up that chase.”

During the interview the actor also talked about getting in shape for the series, how his character was partially inspired by his Chihuahua, Daisy, the difficulties of comedic scenes, and more. Watch the full interview below and stay tuned for more interviews with other members of the cast. Reacher is officially available to stream on Prime starting tomorrow. (Sometimes Amazon drops early)