SciFi Vision | Interviews | Exclusive: Teresa Palmer on the Impact of Motherhood & More on A Discovery of Witches

Exclusive: Teresa Palmer on the Impact of Motherhood & More on A Discovery of Witches

Today, the final season of A Discovery of Witches, based on the trio of novels by Deborah Harkness, premieres on AMC+, Sundance Now, and Shudder in the US.

When witch Diana, played by Teresa Palmer, and vampire Matthew (Matthew Goode) return from 1590 to their own time to continue their hunt to recover the elusive Ashmole 782, Diana is already pregnant. Now having the experience of being a mother in real life, Palmer was impacted in the way she played the character this season, the actress told Jamie Ruby of SciFi Vision in an exclusive interview. “I got to dive back into the feelings of becoming a mother for the first time,” said Palmer, “because that's a very special certain feeling of newness, newness and anticipation and excitement. Also, you're very nervous, and you're trying to find your footing.”

The actress also said that she played a big part in the way the birthing scene comes to fruition. “I met with the writers; I met with Deb, and I just kind of folded in some of the sisterhood element to the birth experience and incorporating Alex Kingston in the birth a lot, that real sort of [feminine] divine energy that sort of takes over when you give birth, or when some women give birth, and I wanted that experience for Diana on screen.” 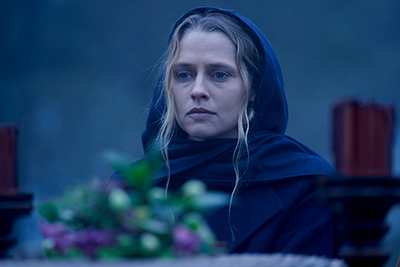 Palmer also added that there are scenes highlighting the postpartum struggle in the season as well.

If motherhood helped her connect, the part that the actress found more difficult to relate to was Diana’s academic side. “I was definitely a fish out of water,” said Palmer, who once again turned to Harkness. “[S]he was my sister in all of this, and whenever I felt wobbly about something, or I couldn't connect with [Diana], or I didn't understand an aspect of the script or maybe one of Diana's choices, I would turn to Deb, and she was just there all the time…I was just lucky that I had so much access to her.”

During the interview, Palmer also talked about how COVID protocols affected filming, including missing her Halloween costume parties she likes to throw, what costume piece she wants to keep from the series, how the costume department made her daughter an Elizabethan dress like Diana, and more. For the full interview, please read the transcript below, and be sure to check out season three of A Discovery of Witches available to stream starting today on AMC+, Sundance Now, and Shudder and check back soon to read what Alex Kingston had to say about filming the birthing scene with Palmer.

SCIFI VISION:  How has being a mother influenced the way you play the character?

TERESA PALMER:   Well, certainly in this season, it deeply impacted me. I think the first two seasons, I had to sort of pretend; I hadn't had that last experience yet, but oh my goodness, it certainly impacted me in season three. You know, I got to dive back into the feelings of becoming a mother for the first time, because that's a very special certain feeling of newness, newness and anticipation and excitement. Also, you're very nervous, and you're trying to find your footing.

Then, I advocated for that birth. You haven't seen it yet, but, you know, obviously, Diana gives birth in season three, and I played a huge part in how that all comes to fruition. I won't give it away, but it's I think it's such a beautiful way to give birth on screen, and I haven't seen it portrayed like this before.

So, I met with the writers; I met with Deb, and I just kind of folded in some of the sisterhood element to the birth experience and incorporating Alex Kingston in the birth a lot, that real sort of [feminine] divine energy that sort of takes over when you give birth, or when some women give birth, and I wanted that experience for Diana on screen. So, that definitely impacted it.

Then, you draw on your own deep well of love and experiences. Also, there're some scenes that highlight the postpartum struggle, which is great. So, there're some moments where I'm trying to breastfeed the baby, and it's not working out so well. She's up late, and her baby's crying, and she's trying to soothe her baby. All these beautiful little real moments that you can weave into a fictional story I think can deeply impact people who are on the same journey and who are going through the same thing. So, yeah, it definitely has made an imprint.

What part of Diana, though, has been the most difficult for you to connect to, other than her being a witch, obviously.

I would say her leaning into her academic life. I was the opposite of that. Although the great news was that I was really interested in history. So, I loved history. That was maybe the only subject that I enjoyed at school. I was never into anything academic. 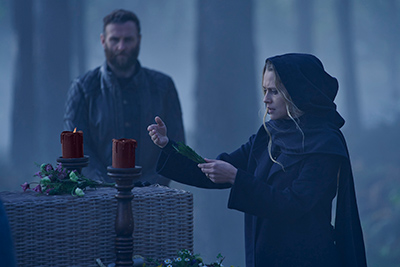 Then, of course, when I read how studious she is, and she's a real academic, I was like, “All right, well, I'm an actor, and I'm gonna start sort of trying to tap into that side of myself. I know it exists somewhere within me.”

I was a relatively good student at school, I just wasn't that interested in it. I was much more creative.

So, I would say that aspect of it was the most challenging for me. Standing up and doing lectures in season one, I was definitely a fish out of water. I didn't even know how would one present a lecture like that. I had to turn to Deb. Thank God, she was my sister in all of this, and whenever I felt wobbly about something, or I couldn't connect with her, or I didn't understand an aspect of the script or maybe one of Diana's choices, I would turn to Deb, and she was just there all the time. She was like the bible. She was like the wealth of knowledge, and so much of Diane is in Deb and vice versa. I was just lucky that I had so much access to her.

Can you talk about how COVID protocols affected filming? It had to be harder at the end of the series, especially, leaving, I would think. You can't really hug everybody and say good bye.

Yeah. Well, Sky had really strict COVID policies in place, which were wonderful, because it kept everyone safe. The protocols, we just familiarized ourselves with them. And we knew, “Okay, three times a week we get tested.”

The crew was separate. So, they had to separate themselves according to their departments. So, the grips were separate from the electrics guys, who were separate from the hair and makeup and separate from the costume. We had all these different separate pods. Typically everyone would all be in the room setting up together, chatting, talking, conversing, hugging, and all that got stripped away. So, the electricians would go in and set up their lighting, and then they would leave, and then the grips would go in and lay down the tracks and do the camera work, and then they would leave. Then, the next department would come in. So, it was sad in some ways, because we weren't having that interaction, that same kind of connection.

Also, you're only seeing the top half of people['s face] all day, every day…I mean, a lot of the crew were the same from season one, so we knew what they looked like, but some of the new crew, we didn't even know what they looked like. We only had snippets of eyes, and you'd find yourself creating an idea of what you think the bottom half of their face looks like, and what this person looks like that you see every day at work. Then, you would walk past them at the end of the day when everyone's going home, and you'd see them against their car, and you're like, “Whoa! I created an entirely different bottom half of that person's face in my mind

I always have these big Halloween parties. I could didn't have that this time. So, it was just different, but we felt really confident in the protocols, and we were really grateful that we were even able to work, because so many other industries completely shut down. The fact that we were supported to continue to work was such a blessing that rarely did I hear any complaints. We were just very grateful that we were able to keep our jobs, and I think the crew felt the same way.

You made me want to ask; I assume these were costume parties. What's your favorite costume you've worn to one of these parties?

They were all costume parties. And [if] you send out a Halloween costume invite to a crew, and you've got hair and makeup in there; you've got the costume department, you should see the level of effort. People were doing SFX, special effects makeup. I mean, the whole crew would go out. We partied until four a.m. a couple of years ago, and everyone ended up in the pool together in their costumes, and it was so fun. 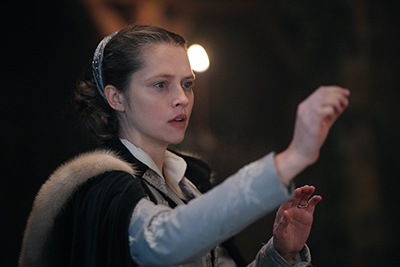 Two years ago I did, it was sort of an easy costume, but it was my kid's favorite one. I went as an alien in a spaceship. So, it was one of those big green blow up costumes. So, I was overheating constantly, but it was amazing, because you could just walk around Cardiff. We were Trick or Treating around Cardiff in this huge alien costume. And Trick or Treating isn't massive there yet, so we definitely got a few odd looks. My whole crew of kids, everyone dressed up, and [we were] knocking on people's doors, and it was really it was really fun, but I've done many many many many, many different ones.

I went as a piece of toast this year, so that was good.

Did you take anything or were you given anything from the set?

I really want the blue coat, the Diana blue coat. I know it's in the hands of our press department, and they are saying that I can have it at the end. I kept a pair of sneakers; kept a pair of jeans.

Oh I do have the cutest little Elizabethan matching gold gown for my daughter. They made her a matching gold little dress, and that was divine. So, the day I was wearing that dress on set in season two, everyone kind of stopped, and they brought my baby in wearing the outfit, and little did I know she had done fittings for it, and they had made her matching Elizabethan dress. So, that was very sweet. And the Book of Life, I think I get to keep the Book of Life. There're three copies, and I get to have one of them at the end.
Twitter
BotonSocial por: SocialEmpresa
Category: Interviews