With just six episodes this season, The Expanse is barreling toward its series finale faster than a slingshot racer on the Jupiter-6 run.  This week, the penultimate episode, “Why We Fight,” finally brought Chrisjen Avasarala and Camina Drummer together in a moment that was worth waiting for. Their meeting on Ceres was a brief scene loaded with six seasons of political conflict and personal loss.

Throughout the series, Avasarala has lost her son, her marriage, her position, and power. Her planet was attacked, her people devastated, and her husband killed. SciFi Vision asked actress Shohreh Aghdashloo in an exclusive interview what drives Chrisjen to continue to lead in the face of such tremendous cost, and what brought her to an alliance with Drummer’s fleet. 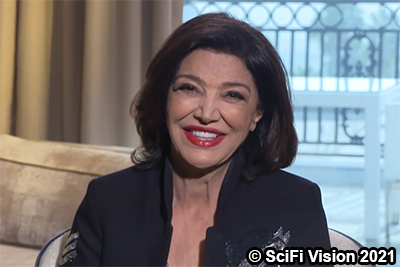 To begin with, Chrisjen’s career is more than a job, it’s a vocation. “She's highly educated,” explained the Emmy winner (House of Saddam) and Oscar nominee (House of Sand and Fog), “and her education exceeds her rank. She knows everyone in the political world by their name, even their nicknames, and she knows about everybody...Like Drummer, she has dedicated herself to her job, business, profession, which now she has become one with.”

But what Chrisjen has seen and experienced has brought her closer to the people she governs. “When she starts, she is watching it from far away,” said Aghdashloo. “Now she's inside, with the people, suffering the same casualties, same atrocities, as her people are experiencing.”

Aghdashloo also attributes Chrisjen’s pragmatism to maturity. “Let's do not forget about the fact that when we age,” she reminded us, “…gradually and slowly, you learn not to rush into any decisions, to sleep on it, to think thoroughly about it. And in this case…she's lost almost everything that she's had, that she's been working for, hard, and fought for. But now, she has nothing to lose.”

In the interview, Aghdashloo shared additional thoughts on Chrisjen’s new perspective on leadership and the people she serves. We also talked about her character’s evolving look each season and what inspired Chrisjen’s new short haircut. Watch the video interview below, and don’t miss the series finale of The Expanse, next Friday, January 14, on Prime Video.