Cast and Producers Talk Naomi, Premiering Tonight on The CW

Tonight, The CW premieres its newest superhero adventure, Naomi, starring Kaci Walfall in the title role. When the unexplainable happens in her own hometown, Superman blogger Naomi starts to question everything she she knows about herself as odd things start happening to her.

The series is part of the DC Universe, but a bit different than you might think, as the world isn’t yet aware of Superman other than as a comic book character. “I think what's so lovely about the world of comics and DC specifically is that there's really something for everyone,” executive producer Jill Blankenship told SciFi Vision during a recent TCA panel. “And in it, you get to touch on all these different places and all these exciting characters.” Blankenship also said that when it comes to potential crossovers with other DC series on The CW “nothing is ever off the table.”

Executive producer Ava DuVernay, who, as has Blankenship, has worked in the DC Universe before, liked that it is different than other super hero origin stories. “[S]he's who she is, and she knows everything that's going on. This was really the step to becoming yourself, the steps to realizing your destiny, the steps that it takes to become who you're meant to be.” 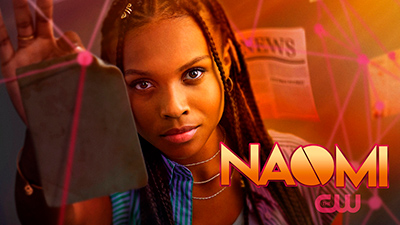 DuVernay also loves that it’s a relatable coming-of-age story. “[A]ll comics are really personal human stories about the journeys that we all take, written in with issues of heroism and magic, but really, the best stories are the ones where things are happening that we can all relate to.”

Walfall, who got the audition by email, felt really connected to the character when she first read about her. “I really felt connected, and I loved her sense of confidence,” said Walfall.

Alexander Wraith, plays the character of Dee, who mentors Naomi to understand her powers, said that he had always been athletic and had been into martial arts, but gave it up years ago. “It was honestly a reawakening…when I found out about this and realized I had to start training. It took some time to get back and get the motor going again.”

The cast and crew also touched on how the series uses what DuVernay calls “normalization.” The series will deal with real issues and have representation, but she feels they do it in a different way. “We're doing really muscular things as it relates to race and gender and class,” said DuVernay, “but we're doing it by playing it normal like it's just a part of the everyday…The more that you can portray images without underlining them, highlighting them and putting a star next to them…we start to make that normal and that's a radical revolutionary thing.”

Be sure to check out the all-new series Naomi, tonight on The CW.
Twitter
BotonSocial por: SocialEmpresa
Category: Interviews