Carrie is a reimagining of the classic horror tale about Carrie White (Chloë Grace Moretz), a shy girl outcast by her peers and sheltered by her deeply religious mother (Julianne Moore), who unleashes telekinetic terror on her small town after being pushed too far at her senior prom. Read the full press release.

In preparation for the the release of the DVD, SciFi Vision is giving away 1 copy of Carrie on Blu-ray! 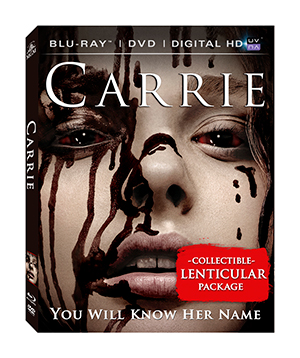 To enter, simply follow the instructions below! Note that you MUST follow @scifivision on Twitter and tweet the entry to win, other entries methods will give you more chances of winning (More options will show once you have completed the mandatory ones). Prize courtesy Twentieth Century Fox Home Entertainment, but they are not a sponsor, administrator, or involved in any other way with this giveaway. Contest open to US residents only.
a Rafflecopter giveaway
Twitter
BotonSocial por: SocialEmpresa
Category: DVD Giveaways