The White Queen is a riveting portrayal of one of the most dramatic and turbulent times in English history. A story of love and lust, seduction and deception, betrayal and murder, it is uniquely told through the perspective of three different, yet equally relentless women - Elizabeth Woodville, Margaret Beaufort and Anne Neville. In their quest for power, they will scheme, manipulate and seduce their way onto the English throne. Read the full press release.

In preparation for the the release of the DVD, SciFi Vision is giving away 1 copy of The White Queen on Blu-ray! 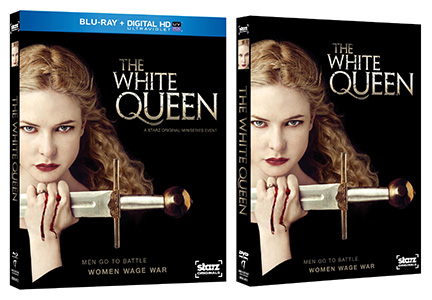 To enter, simply follow the instructions below! Note that you MUST follow @scifivision on Twitter and tweet the entry to win, other entries methods will give you more chances of winning (More options will show once you have completed the mandatory ones). Prize courtesy Anchor Bay Entertainment, but they are not a sponsor, administrator, or involved in any other way with this giveaway. Contest open to US residents only.
a Rafflecopter giveaway
Twitter
BotonSocial por: SocialEmpresa
Category: DVD Giveaways