THIS OCTOBER, DISCOVER THE FX-PACKED SYFY REBOOT OF THE INTERNATIONAL HIT SERIES THAT FOLLOWS A TEAM OF SCIENTISTS BATTLING AN INVASTION OF PRESHISTORIC CREATURES

When an invasion of prehistoric creatures threatens North America, visionary inventor Evan Cross (Matter) assembles a team of highly-trained scientists and animal experts to battle the deadly predators and investigate the anomalies that brought them through time. The team quickly gains expertise in the prehistoric creatures they hunt, the weapons they need to handle them, and the nature of the anomalies themselves. They face danger side by side, and come to rely on each other for not only survival, but friendship as well. PRIMEVAL NEW WORLD aired on Syfy. Read the full press release.

In preparation for the the release of the DVD, SciFi Vision is giving away 3 copies of PRIMEVAL NEW WORLD: THE COMPLETE SERIES on DVD! 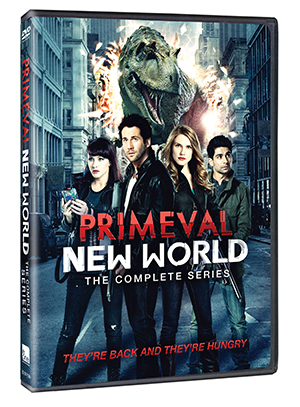