ESCAPE TO THE MYSTERIOUS TOWN OF HAVEN AS SEASON THREE OF THE HIT SYFY SERIES ARRIVES ON DVD & BLU-RAY, LOADED WITH EXCLUSIVE EXTRAS PLUS A 16-PAGE COMIC - JUST IN TIME FOR THE SEASON FOUR PREMIERE!

Everything is about to change in the third season installment of HAVEN, the hit Syfy series from the creative team behind "The Dead Zone" and "Tru Calling" that Entertainment Weekly called "a must see show!" Hailed by critics and fans alike (in its third season, HAVEN was the #1 original scripted cable show among adults in its Friday 10 p.m. timeslot), HAVEN: THE COMPLETE THIRD SEASON arrives on DVD and Blu-ray September 3 - in anticipation of the series' Season 4 premiere on Syfy September 13.  Read the full press release (including a trailer).

In preparation for the the release of the DVD, SciFi Vision is giving away 3 copies of HAVEN: THE COMPLETE THIRD SEASON on Blu-ray! 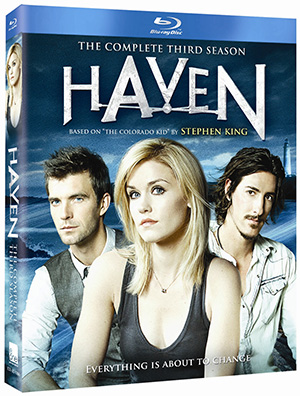