It has become a cultural phenomenon. The fans embrace it, the critics adore it. And now the stakes have never been higher for the survivors...On August 27th, Anchor Bay Entertainment unleashes AMC’s original series THE WALKING DEAD: THE COMPLETE THIRD SEASON on Blu-ray™ and DVD. Available as a 5-disc set in each format, the release contains all sixteen episodes from the past season. Like the previous releases, THE WALKING DEAD: THE COMPLETE THIRD SEASON comes stuffed with tons of bonus features, including exclusive behind-the-scenes footage, never-before-seen featurettes, audio commentaries from cast and crew, deleted scenes and other surprises!

In preparation for the the release, SciFi Vision is giving away 3 copies of THE WALKING DEAD: THE COMPLETE THIRD SEASON on DVD! 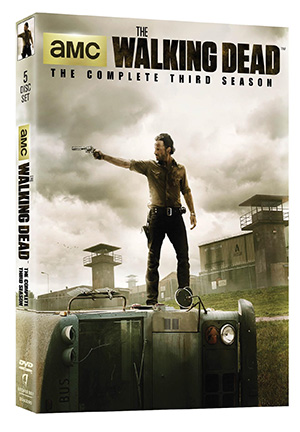 To enter, simply follow the instructions below! Note that you must follow @scifivision on Twitter and tweet the entry to win, other entries methods will give you more chances of winning (More options will show once you have completed the mandatory ones). Prize courtesy USA Network, but they are not a sponsor, administrator, or involved in any other way with this giveaway. Contest open to US residents only.