The Borgias 2.3 Review: "The Beautiful Deception"

By the time this episode was over, I was completely befuddled. Not by the plot; that was simple enough that Jordan had plenty to opportunity to focus on the more important element of character development. Not by the complete rewrite of history; the show had long since deviated from the historical record, so why not take it even further? No, the real confusion was why this episode was so much better than almost anything “The Borgias” has done to date.
It might have something to do with Amiel’s direction. There was less of the self-indulgent art-house style that seemed to suffocate many of the previous episodes. The end result seemed to give the cast a bit more room to breathe. The standardizing effect of post-production and editing kept it very close to the usual tone of the series, but there was a definite change in the presentation of the material.

The most important shift, however, might be in the character of Lucrezia Borgia. Up to this point, she was far from her infamous reputation, something that was widely promoted but had yet to be seen on the show itself. That has changed, and it’s like we finally got some life out of Holliday Grainger in this role. Once it was clear that Juan was behind Paolo’s death, it’s like a switch went off in her head.

Has it been a purposeful depiction, to allow for this moment? A questionable choice, perhaps, but there is evidence for it. When she stepped into Juan’s bedroom, while he was in the midst of a tryst, there was a definite change in her appearance. Gone was the softer, more innocent look. She looked a bit older, sexier, and wilder, like a tiger that was finally let out of her cage. Her casual act of attempted murder was a joy to behold. 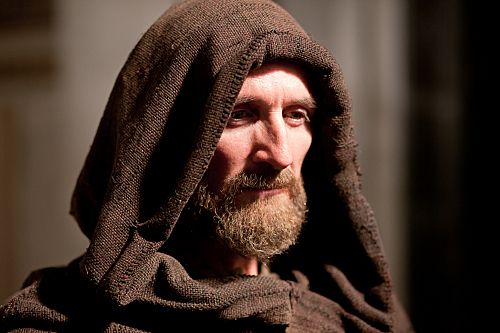 One could simply interpret it as a self-inflicted wound on the part of the family. We’ve seen Cesare and Juan at each other’s throats this season, but Lucrezia was somewhat removed from it all. Her role was “marriageable bargaining chip”. But Juan pulled her into the game, so to speak, and now that she’s in, she’s all in.

The test will be the rest of the season. While she can’t keep trying to kill Juan for the rest of the season, this does set her up to be a much more interesting tool for Rodrigo to use. One might even wonder if this will drive her to play on those interests that Cesare has been showing since the series premiere. Whatever the case, now that Lucrezia is finally showing some spark, it would be folly for her to regress.

The other subplot, involving the potential invasion of Rome by the French king Charles and his allies, was a nice way to incorporate Rodrigo’s young lover into the mix in a way that capitalized on her other talents. It would certainly be interesting if she wound up the latest target of Cesare’s affections; one wouldn’t blame him for being tempted. Of course, it would likely go badly for the poor girl, but that’s what happens when you bed the Borgias.

The only issue I had with it was the historical context. Most of the changes up to this point were relatively minor. This one had me puzzled. I honestly have no idea when this is supposed to fit into the historical timeline. I would assume that this is not meant to be the full French retreat that takes place years after this point, but rather, a way to incorporate historical figures that will play a bigger part down the road, should additional seasons come to pass.