I think the fact that this episode had four credited writers kept it from being very focused. There is a lot going on here and the show felt the need to check in on all of it. The central theme is something that has been explored on this show a lot: Lawyers are corporate and evil and bloodthirsty. It takes a judge going off the bench to get defended against prosecutorial misconduct to see that. It's really nothing new.
I think this unfocused episode is a product of the sudden coming of the end of the season. There is only one episode left and the larger story arcs are left completely open. There is no mention of Peter's race for governor, nor the condition of his ill mother, and the resolution to the investigation into Kalinda's tax issues is still unclear.

Normally, with so many stories, a good fallback the show has relied on is a compelling Case of the Week. This one had an interesting start, only to end up muddled and feeling unsatisfactory as the episode closed. A judge is thrown off the bench for possibly bungling a case he was prosecuting twenty years before. They explore the facts of the case, and when it looks like the judge might be guilty, Alicia and Diane throw the blame at the judge's former colleague. The truth in this case was more ambiguous than the show has done in a long time so it's hard to know who bungled what in the case from the past.

Even if the judge was guilty, there was the question of what his punishment would have been. Is he no longer a judge? That's as far as it seems to go. No jail time. No fine. Only an observation that lawyers like Diane and Alicia continue to operate along that line where their morals are more cloudy than clear. I felt that the only enjoyable element about the case was the small-town judge played by Stephen Root. He works more freely and informally than the judges normally shown on the series and that probably has to do more with the format of the case being tried. It's more of an informal inquiry rather than a full-fledged trial. It's nice that the show is playing around with different formats of the judicial process, much like the blue ribbon panel investigation from a few episodes ago. The resolution here, unlike the blue ribbon panel, was less satisfying than that one. 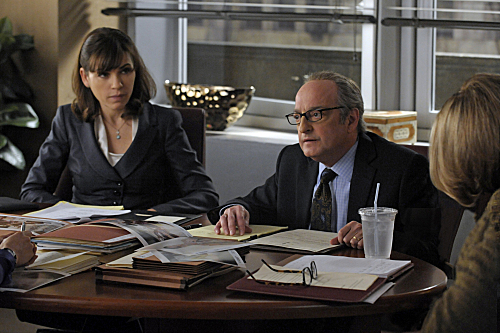 The part of the episode I did enjoy very much was Cary's return to the "family" of Lockhart and Associates. This is surprising to me because I haven't been the biggest fan of Cary's quietly cocky attitude for much of the series. His return was well-handled on every end, though. Lockhart and Associates needs bodies to take on cases and Cary is a familiar face, which helps immensely. Also helping is his diminishing stature at the State's Attorney's Office and that makes the decision to bring him back to the firm all the more sensible. Cary's departure away from Peter had a lot of poignancy to it as well. Cary looked up to Peter, possibly wanted to be him at some point, and then that was just lost when he was demoted from the Deputy S.A. position.

A lot of character dynamics are explored here, from Alicia's more chummy relationship with Cary contrasted by the contentious one he has with Will. That was due to the investigation arc that was closed so long ago. I liked that the show doesn't forget about the events from the past and that there are still consequences to it, even if it was brief then tossed aside with a handshake. I hope there are more potential storylines to explore in the future involving Cary and Eli and perhaps Howard popping up on occasion. Anything involving Howard is nice comedic relief for such a drama-heavy series.

All that's left is to deal with the investigation into Kalinda's tax issues. The show has been sporadically advancing the story thread through much of the back end of the season, and there isn't much resolution here. The thread re-introduces drug kingpin Lemond Bishop back into the fold, though I really struggled to remember exactly why he should be a character worthy of the show's attention. It doesn't help that he hasn't been seen in person since the middle of the second season and only talked about in passing here this season.

I think it wraps more interest around Lana, the jilted FBI agent who wants to take Kalinda down. That Lana has a personal stake in all this is a good touch, although it feels like this story has been played out. Kalinda once again plays her former lovers like fiddles, which is a well the show has dipped in too often. I have no doubt that Lemond Bishop would kill Kalinda without so much as batting an eye, but it's hard to take such an oblique threat (Lana threatens Bishop who in turn threatens Kalinda) too seriously.

The show seems much more concerned with the different ways it can show off its deep roster of guest characters than building a solid story. The season finale is coming up next and I really don't know where the show will go or what it will address. There's no sense of momentum, I think because the series played too many of its good cards earlier in the season, and it's going to be hard for the finale to truly build from what happened in this episode. Maybe it just needs a strong capper to another solid season instead of a cliffhanger. I personally think that might be a welcome outcome.