Now that it's clear where the Astraeus crew is located, the season can move onto the matter of what's going on back in the real Eureka. "The Real Thing" splits its time between two parallel stories: Barlowe and her team must work to prevent their subjects from discovering that their world is a deception, while Carter and the rest of the townsfolk continue their search for the missing crew. I have no qualms with admitting that I was more engaged by the events occurring in the "real world". However, the virtual Eureka does leave us with an unusually tragic ending that characters will likely be feeling the repercussions of for quite some time. Let it not be said that "Eureka" is afraid to go dark when the story calls for it.
It's been a month since the Astraeus disappeared, and neither Carter, Henry, nor Kevin are ready to stop looking yet. The DOD, however, is. This news does nothing to dampen Kevin's determination. Henry soon realizes that Kevin is on the verge of a breakthrough, so our heroes are forced to go rogue in an attempt to secure the parts needed to complete Kevin's machine. Carter manages to rope Deputy Andy into the plan, and the two scurry off to steal government equipment. Need I even mention that Deputy Andy is, once again, hilarious? I love how much the character has evolved. He doesn't quite have the same relentless optimism and cheerfulness, but it's impressive that he's at the point where he can calmly suggest that it might be time to give up hope, while somehow not feeling out of character.

Meanwhile, Jo is off attempting to go on a walkabout, following Taggart's example. This soon leads her to her childhood home, where she finds that Carter has been desperately trying to contact her. Jo quickly returns to Eureka, arriving just in time to bust Carter and Andy out of their own jail. Somewhere around this point, Carter arrives at another one of his surprisingly smart revelations, suspecting that the reason they haven't been able to detect the Astraeus is because they've only been looking in space. A quick calibration of Kevin's machine, and they have the location of the Astraeus. And not a moment too soon, as an angry Senator Wen arrives demanding answers. 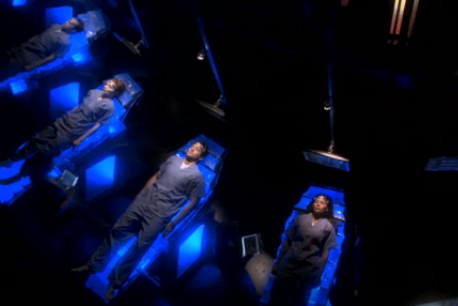 In virtual Eureka, the Astraeus crew are becoming increasingly suspicious about a string of strange events. The problem seems to be a result of Allison's unexpected presence in the virtual world. Apparently, twenty-one subjects is one more than the Consortium had planned for, so the virtual world is suffering from a series of "glitches". One particularly major glitch results in a dragon roaming free around the virtual landscape, which provides Fargo with no shortage of excitement. To deal with this, the Consortium works to craft the arrival of the dragon into a narrative that seems believable to the characters. Weird stuff happens all the time in Eureka, right?

Of course, you can see where this is going. The Consortium outright discusses what the audience is already thinking. These people are smart. What if they figure it out? From an audience perspective, it's not hard to predict that it's only a matter of time before someone figures it out. As I've said, I wasn't as interested in this story thread as much as I was in seeing Carter and co. working to track down the crew, because we've seen this kind of story before plenty of times. Little things will add up and the characters will grow ever more suspicious, and then finally they'll figure it out and break free from the illusion. But thankfully, this is where the episode redeems itself to a certain degree. Holly is the first to figure it all out, resulting in a slightly startling scene in which the NPC Carter seems to coldly murder Holly, leading to her death in the real world.

I'd occasionally suspected that Senator Wen might be tied to the Consortium in some way, but by the end of the season, my mind had drifted from that possibility. Now we have confirmation that she is not only connected to the Consortium, she also seems to have direct control over it. And she's quite the ruthless leader. Even Beverly seems shaken up by the murder of Holly (though it's unclear whether she's simply bothered by the loss of a valuable asset or by the idea of murdering an innocent person). It's an unexpectedly dark turn for the episode. Other moments on the show have delivered more of an emotional punch, but it's still a somber moment. Fargo is going to be crushed.

I'm still not quite sure what to think of the new season's direction, and part of me remains a bit disappointed that the ultimate destination of the Astraeus turned out to be plain ol' Earth. But overall, I'm feeling good about the season, if for no other reason than because it's good to see all the characters back again as their usual entertaining selves. It's a little too early to make a judgment call on how the myth-arc is shaping up, but moving out of the virtual world is a step in the right direction. And whatever my problems with the larger story, the characters are generally the biggest part of the show's lasting appeal. They're an easy bunch to care about. So whatever happens, I'm engaged in their plight.