The deepening of the “Grimm” mythos continues with this episode, as the writers really start pulling the threads together. I think we received more background on the Grimms and the organization of the Wesen culture than we’ve seen all season, and it goes a long way towards explaining why Nick is seen as something of a maverick among his people.
It would appear that there is a resistance to the ruling families of the Wesen, and it has not seen good fortune. In fact, it’s practically a myth of its own, given how the ruling families have wiped most of them out using assassins known as the Verrat. Represented by Edgar, played by an always-exceptional Sebastian Roche, the Verrat has tracked down one of the remaining members of the resistance to Portland. And guess where he happens to look for help?

While it’s a bit convenient to have Rosalee be the once-lover of such a fabled individual, since that’s only included to toss a bit of tension into the adorable lovefest that is Monroe/Rosalee, it does allow for the inevitable conflict of interest for Nick. While Grimms have never been popular among the Wesen, we now know why. At some point, the Grimms decided to work with the seven ruling families of the Wesen, aiding them in their ongoing goal to seize power in the world. The Grimms have contributed to the overall increase in world hostilities as a result. 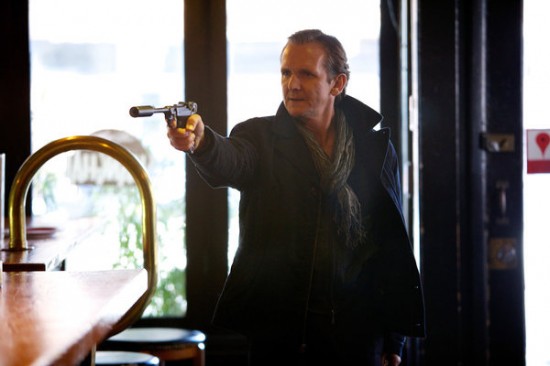 This goes a long way towards explaining why there were segments of the Wesen community, going back to “Bee-Ware”, that support the Grimms. It also sets up the very real possibility that Nick will be seen as a wild card among more traditional Grimms. That’s something that I’ve been waiting for them to pull the trigger on for quite some time, so I see all of this background as a great direction for the series to take.

It serves to place Captain Renard’s activities in context as well. He’s obviously a member of one of the ruling families, and his position is seen as one way to maintain control and influence for his people. So the question is: how does Renard manage to keep his nature secret from Nick? Does the deal between the ruling families and the Grimms involve a certain level of immunity?

This notion of the resistance and the Wesen/Grimm alliance is precisely the kind of larger context/plot hook that had been lacking earlier in the season. I fully expect the final four episodes of the season to flesh this out and set up an escalation of the concept in the second season, which is probably something that the relatively early renewal made possible. Whatever the reason, I’m glad that the show has started to find its voice, striking a much better balance between the supernatural and procedural elements in the process.