From one episode to another, things on this show are never what they appear to be. They change so often, it could be seen as a whiplash effect on the show's plotlines. Thankfully, the show is so layered and the characters so rich that it can compensate for anything that could be considered strange.
The middle section of this episode was really strange to me, and I think that was intentional. The end result of Roger taking LSD is a realization that we, the audience, have known for some time, and he has just found out. This episode also follows Peggy and Don through one eventful day, and at the end of that day, they both find out certain revelations about their lives that will reverberate through the rest of the season. They aren't necessarily big revelations, but it does change how each character is seen within the scope of the series.

Being that Peggy is the lone person in the office who would close to Don (see last season's "The Suitcase" for proof), it makes sense she would try to be Don as much as she can. Her "relationship" with Abe doesn't seem to have much depth to it beyond sex. This leads to an argument, much like Don's relationships with the various women outside of his marriage to Betty. Peggy's frustration bleeds into her presentation to Heinz, and that went down in flames when Peggy tried to force a pitch to the client the way Don usually does. Don is absent at the pitch meeting so he can't work his usual charm to rein the client back in.

There's an element of sexism from how Raymond responds to Peggy's forceful presentation after he didn't like what she had. It's a sense that he wouldn't be so upset if Don was the one pitching the Heinz ad. I think Peggy is too good-hearted to fully emulate Don. Not to say that she is without fault, but she doesn't have the amount of baggage and personal demons that Don does. She'll take drugs recreationally and give a stranger a hand job in a dark movie theater, but it won't compare. Maybe with the accumulation of time and age, though that's not coming fast enough. 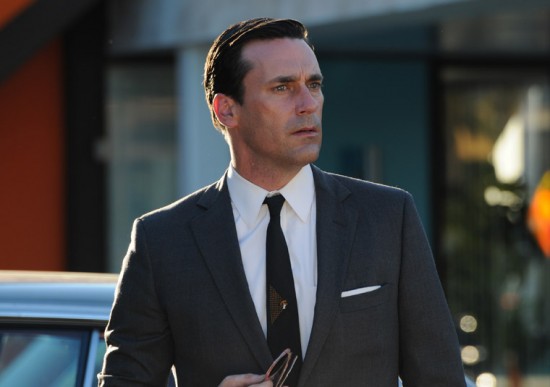 In the end, she invites Abe back to her apartment because she's lonely. She learns that her work is good, though not good enough to some people apparently, and frustrations will build without her mentor there. It's the episode's lightest plot so I think that's why it flew by when I watched it. It also gave no real clue into the true structure of the episode, which I really liked. It added to the sense of disorientation with everything that occurs.

Roger is forced to go to a party with his wife since Don also abandons him for Megan. The surprise here is that LSD is involved. Roger's acid trip was probably the strangest sequence the show has ever done. It would have been quite funny if it weren't so sad. Vodka plays Russian opera music when the bottle is uncapped. Roger sees himself with young, dark, slick hair and aged gray hair. A specter of Don tries to advise him. Where one would expect there to be wild or somewhat scary visions to pop up after taking acid, Roger actually comes straight to a truth about his life he has been denying for a long time now. He is no longer in love with Jane.

Their marriage has been dysfunctional for a long time. They snipe at each other as if it were a common occurrence. They were once in love for a time, but that was when their marriage was new and it was trendy to take a young and pretty wife. That was years ago. They have no common ground to stand on, and Roger seems okay with that. He seems to have known for a long time that the marriage was fraying. Is this where Don and Megan's marriage is headed down the road? Is it only a matter of time before age and degradation take over and puts a wedge between two people? Time passes, and people change. Roger hasn't adapted, both in his work and his marriage, and he's losing both now. Can he save any of it before it's too late? Does he even want to save them?

Don's little trip with Megan was, in my opinion, the centerpiece of the episode. He may believe that Megan is the right person to be with, but one wonders how long that will last. Their argument starts in small ways, from Don's cigarette in the car causing Megan irritation to his practically forcing her to eat orange sherbet ice cream at the restaurant. Those little things start to build and build until Megan is practically screaming at him in view of everyone. Does he know his wife at all? Does he realize that he's been living in the past while everything about Megan represents the future? Don is throwing that future away, and he almost loses her when he drives away in a huff.

True, she shouldn't have brought up Don's mother (here is where her knowledge of his past as Dick Whitman comes into play), but she didn't really mean to bring it up. They were arguing and the most hurtful of things come out during the course of an argument. Don realizes this a bit too late and that's why he was frantically searching for Megan in every way he could think of. It comes to a head when he returns to their apartment, where she had been during that entire lost night. I thought it was interesting that, after Don chased Megan around the apartment (like something that would happen in a horror movie, which echo the historical events in "Mystery Date"), they end up in the same position on the floor as Roger and Jane did earlier in the episode.

Roger and Jane are on the outs. Could Don and Megan share that fate? Megan seems to believe it will come to pass with her "diminishing" comment. Roger's realization came from taking drugs. There were no drugs involved with Don or Megan. This is what they truly are under the veneer of the trendy couple in love. They make up, in part because I think Don still believes she can save him, and so come back to the office looking like a power couple.

Underneath, they are far from it. That night had to have diminished them a little bit. Time will pass, and perhaps that crack in their marriage becomes a chasm. Don should begin to get his house in order. Things at work are falling apart. Things at home are not much better. He is running out of time to correct what he can, yet he seems unable to recognize any of it. Will he do nothing as time passes him by?