This episode was always going to be controversial. The producers have decided to make the 19th episode of every season a format-busting departure, a pattern that began in the second season with the woeful “Brown Betty”. Each departure has been a love it/hate it moment for the audience, and with the added anxiety over the future of the series, a lot of fans were concerned that this would end up being a needless waste of much-needed resolution time.
Having watched it twice now, I’m still not sure what to think of it. Not because of the timing; the producers said months ago that they were making very few changes to the season arc, despite the struggle to keep the show on the air. And given where the arc appears to be going, I think it’s safe to say that the show can be brought to something of a conclusion, if necessary. The elements are coming together in just the right way to allow closure or continuation, depending on the whim of the network/studio negotiations.

At first glance, it may be hard to see how this fits into the overall “Fringe” equation. Let’s face it: the motivations of the Observers have never been entirely clear, even as they have sought to manipulate events more and more this season. But it’s jarring to have it all tossed out so baldly. In essence, the future is very bleak, on the brink of destruction, and humanity has adapted about as much as they can. Whatever scientific interest they might have had in understanding their past and the events that led to their future world, it has given way to avarice. The surviving future population has decided to repopulate the past.

What isn’t clear is how things got from 2012 to 2036. This isn’t the future that was seen in the third season finale. This seems to be a different look into the future, one that is the direct consequence of events about to take place. Whether or not Mr. Jones’ plan to merge universes has been successful is not clear, as only one universe appears to be covered. The Fringe team as we know it is gone, replaced by a division that handles human-on-human crime. 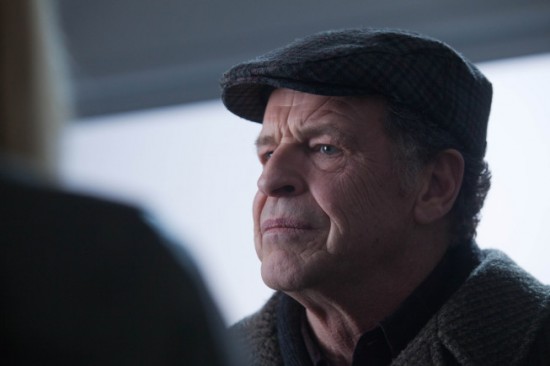 It all plays out like a “Fringe” homage to “Casablanca”, in a sense. (Recalling Broyles’ role in “Brown Betty”, actually.) We have the humans operating their own law enforcement in a city besieged by the oppressive Nazi-esque Observers, a familiar scene in a night club, and Broyles dealing with a Captain Renault scenario with the Observer named Widmark. I was waiting for Broyles to pull the same kind of reversal in support of the underground resistance, just based on that alone.

Much of the story is seen from Etta’s point of view. As a member of Fringe Division working with the resistance, trying to locate and rescue the fabled team members from 2012 who are said to be dead, Etta is basically a stand-in for Olivia. She’s got a lot of the same mannerisms and speech patterns, which is a nice touch. Of course, it also made the big payoff at the end of the episode so damn obvious that it lacked much of a punch. I imagine some of the disappointment with this episode is based largely upon how flat that plot thread fell.

Bringing back Walter was the best move, because it hid the biggest reveals until his memory (already problematic) could be restored. And here is the part that is most important in the context of the fourth season arc: Olivia’s death, presaged by September, is ultimately due to none other than William Bell. And the key to everything, at least in terms of resolving the “invasion”, has something to do with Bell’s hand, which Walter conveniently chipped out of the ether. How they would make all of that work without Leonard Nimoy, I’m not sure, but I imagine they’ve taken that into account.

The biggest concern is whether or not this is just a “what might happen” episode, a glimpse of the stakes should Mr. Jones merge universes and open the door for the Observer invasion (what appears to be the endgame). If the show ends, then I would assume that Fringe Division would end the threat, perhaps at the cost of Olivia’s life. But this future suggests she survived long enough to have Etta, so that wouldn’t necessarily track, unless they really want to go with tragedy and say that Etta, as a logical ancestor of the Observers, must never be born to eliminate the threat once and for all.

Should the series come back, one can imagine a scenario where the season ends in a very similar way, only pointing to this future time, which could be the setting for the fifth and final season. But would they really go so far as to kill off Olivia completely, replacing her with Etta for at least part of the fifth season? It would be a gutsy move, but with the writing on the wall, why not swing for the fences?

The plot will probably take a direction that makes all of this speculation completely moot, but regardless of where it goes, this glimpse into the future will need to be incorporated into the larger scheme of things, in some meaningful way. It’s not unlike “Epitaph One”, the capstone to the first season of “Dollhouse”, in which an apocalyptic future with an unresolved ending became both a blessing and a curse for the writers when they had to produce the second and final season to achieve and resolve that established future. The writing staff of “Fringe” have shown themselves to be stronger on the whole; can they make it work? Only time (and hopefully a fifth season) will tell.