This episode, "Awake" made full use of its police procedural format. It might be the simplest of episodes the show has aired so far. It's also one that didn't put Detective Britten in the spotlight very much. Instead, there's focus on an accountant for a Russian mobster and his wife. They suddenly need to be protected by the police when the mobster tries to kill the accountant. It's not the worst plot the writers can think of, but I constantly had the feeling of detachment with these people, probably because we're never going to see them on the series again. I also had this nagging feeling throughout that US Marshals should be protecting these people instead of the LAPD. But the episode does seem to further a theory about the show's overall story arc that has been building for some time now.
At least the show doesn't try too hard to push the connective tissue between both of the worlds Michael inhabits. He and Bird quickly get Markus, the accountant for the Russian mob, into protective custody but he won't cooperate unless his wife comes along. Problem is, the wife has no idea the guy works for the mob and that the head of the mob wants him dead. Michael tells her that she has to give up everything she has ever known by going into hiding. The life they built is suddenly, swiftly gone.

This is key since Hannah has made the decision to move to Portland and is now in the process of clearing everything they don't need in the move. At first, Michael resists this. It becomes predictable that by the end of the hour, he will change his mind and follow whatever his wife does. Since Markus' wife was brought back to protective custody by Michael when he got her to share what they did when they first got married, it fits what bookends the episode. Hannah and Michael get closer with their reliving of a skinny dipping dive off a college pool. 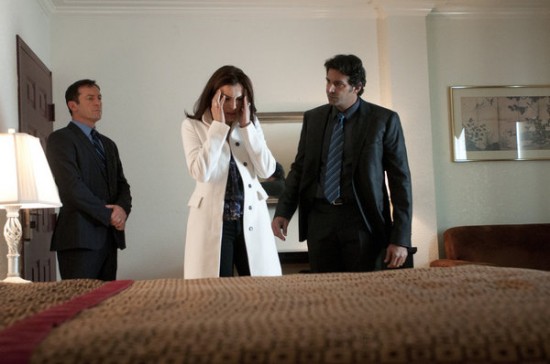 All of this is handled with a sort of elegiac grace by the director, editor, and music composer, turning an average episode into something a little deeper. There is hope for renewal in the story of the Britten couple, with a little tinge of sadness because they're severing their connection to their home. That's also reflected in Michael giving up his relationship to a confidential informant he has known for fifteen years.

It might have been better if the episode didn't have so much emphasis on the Russian couple, though. I watch this show to see how Detective Britten deals with the situations he's in. The guest star couple often overshadowed him in this episode. The threat was hardly relevant too, since we never see the mob boss who goes after the couple. The two thugs who attack the wife's friend cannot compensate for the true threat the mob boss can bring.

With Hannah and Michael getting closer in this episode, there seems to be the theory emerging that the Hannah World is reality, while the Rex world is the dream. We don't see Rex at all here, and the Russian mob case occurs in the world where he's alive. This could be Michael's brain working through a reminder that he needs to bond with his wife rather than constantly saving his son from danger. This was how the case in the Rex World informed on events in the Hannah World. He is getting closer to severing all of his meaningful ties in Los Angeles with the move to Oregon so that also fits with the theory.

In addition to no Rex, both psychiatrists are absent from the episode. That could be significant as well. Michael is getting better at figuring out what is going on with his situation and doesn't need the hand-holding the doctors bring to the table. I'm still holding out hope that neither world is the reality because that would be a brave narrative direction to take (even as it might invalidate everything we've seen so far in the series), but the Hannah world being reality seems to be the simplest, easiest explanation to go for now.

The show is already very complex to its roots and mucking up the narrative would not be good. Sticking only to the police procedural keeps the show viable, but yields an average episode like this one. The show may not last very long and its concept may be unsustainable. Michael and Hannah going off to Portland together would be the best possible happy ending for the series.