This far into the season, I’m still of the opinion that the writers are struggling to shove the narrative towards some semblance of a grand unifying conclusion, even if the various plot points don’t necessarily gel very well. We finally get a resolution to a long-standing mystery, and there’s some clarification to the overall generational conflict, but all the meandering, fits, and false starts of the season have left me cold.
John DeLancie comes in for this episode as Basil Exposition, aka Grandpa Royce, to deliver the kind of background on the whole witch/circle thing that probably would have been good to know much earlier in the season. At this point, though, it’s hard to know if this is the real story, or just his interpretation of events. Regardless, it goes like this: three circles of witches left Salem, with two staying on the East Coast and one arriving on the West Coast in Chance Harbor.

John Blackwell, as the Balcoin descendent and overall dark wizard, wanted to take control of a circle and do diabolical things. While he was perfectly fine with the idea of corrupting his own circle and leading them into a confrontation with the witch hunters (descended from the ones that the witches fled in Salem, I imagine), he figured the real goal would be to corrupt the next generation’s circle on a fundamental level. As such, he did his best to stack the deck with his own children. And as we know, Cassie has a mystery sibling, which makes it two out of six. 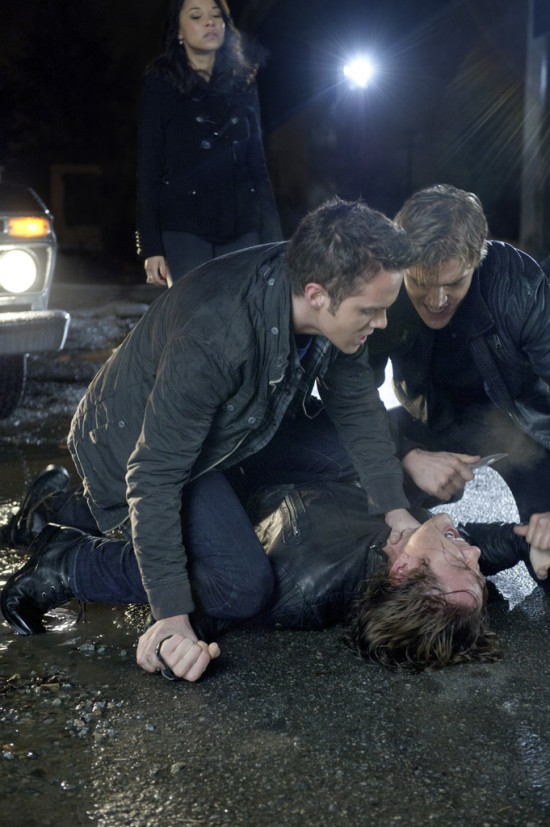 All season long, the writers have been pushing the idea that Faye has dark impulses, and wants Cassie’s power. Never mind the fact that they’ve all but demonstrated that this is a defense mechanism borne of her lack of self-esteem; we’re supposed to ignore that and buy into the notion that she is still a prime candidate to be Cassie’s sister.

Unfortunately, it’s far too obvious, because she was set up as Cassie’s antagonist from the start. That didn’t leave much in terms of possibilities, because who else has been set up since the very first episode to have issues with Cassie? Diana, of course, given her previous relationship with Adam. Granted, I didn’t really see that coming when the plot point was initially raised, but in retrospect, it makes thematic sense.

It also hints at the promise of some Dark Diana action, which I think could be pulled off a lot better than Cassie’s reaction to using her dark powers. When Cassie gets all hot and bothered by the rush, it looks silly. Diana has already shown a lot more smolder in less ecstatic circumstances. Of course, I also thought Diana was a better match for Adam, so it may just be a matter of personal taste.

Meanwhile, even though Blackwell cruelly turns the table on his captors, killing Jane in the process, I’m not sure that it lends full credence to Royce’s story. The problem is this: Charlie and Jane have hardly been angels themselves, contriving to steal power from the current circle to regain their own. And they were planning to kill Blackwell. So one could easily see this as a sort of self-defense, and it fits his stated purpose to protect his children. While it’s true that evil often wears a pleasant face, and these writers don’t always play fair with character motivations, I hope it’s not so clear cut as it seems.

The last three episodes really have to bring all the pieces together with more clarity, and it wouldn’t be a bad idea to clear the decks of extraneous nonsense and pay attention to solidifying the Circle, once and for all. If there is a second season, and that’s hardly a given at this point, the writers would be well-served to give the next major season arc a lot more focus.