I mentioned in the review for the previous episode that it felt like the third season arc had been poorly conceived, and that what should have been a clear path to the season finale endgame was becoming a muddled mess. I was hoping that this episode would resolve that problem, but for the most part, it just continues along the same path.
Like many love triangles, the constant push-pull between Elena and the Salvatore brothers is getting to the point where it is getting very, very old. The breaking point was the moment when Elena declared that she had realized that neither Stefan nor Damon were going to be the right choice for her future, followed by a backslide into the same old unresolved sexual tension. That it’s mostly between Elena and Damon is irrelevant. Yes, the fact that the cast members are dating adds to the chemistry, but Elena’s indecision is beyond tiresome at this point. 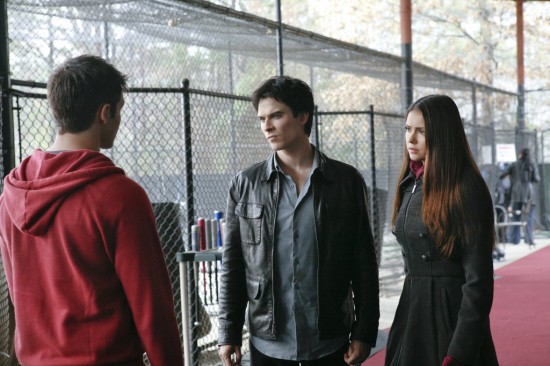 The thing is, Elena’s fleeting moment of self-realization aside, this season has made a terrific case for Elena choosing to be with Damon for a while, if only for the sheer passion of it all. The girl needs to get him out of her system, and just about everyone knows it. While I would never want to see Damon tamed more than he already has been, since he’s too much fun as an amoral monster, his character growth requires moving past Elena in a healthy way. It doesn’t have to “fix” him, so much as allow him to evolve.

What made this so egregious in this episode is the notion that Rose, as a ghost, needed to come back and explain to Jeremy (and the audience) what the nature of Elena’s inner conflict is. Quite frankly, at this point, most of the audience could write a doctorate dissertation on the subject. That’s how much depth they’ve explored the dynamics of the situation. Dragging it out to the season finale or beyond is an exercise in frustration for an audience that just wants to see some damn progression.

At least there were some distracting moments between Caroline and Tyler. Really, I’ll take moments with Caroline and just about anybody, since she’s more fun than Elena at this point, and there hasn’t been much time with Katherine this season to allow Nina Dobrev to let her wicked side run free. Even there, though, the writers seemed to get mired in relationship issues that could have been quickly resolved. Tyler acts like a child, even when it’s clear that Caroline never gave in to Klaus and his clumsy attempts at seduction. It felt like a way to delay what has to happen with Klaus, Tyler, and the whole bloodline issue until the season finale.

The saving grace was the plot thread with Alaric, the threat to the Originals, and the twist at the end. I’m still not clear on how Esther has taken control of Rebekah, but it ought to shake things up quite a bit. She’s always wanted to see the end of the vampires, what she sees as her greatest mistake, and Alaric’s dark side will make for a potent weapon. The problem is that it just doesn’t feel entirely earned. I don’t get the sense that this is where it was all leading, and whether that’s a sign that the connective threads weren’t established properly or lack of overall vision, I’m not sure.