Pete Campbell has everything anyone could ever ask for. A successful job, a doting wife, a child, a house in the suburbs. So why is he looking for more instead of accepting how good he really has it? It probably has something to do with his stunted growth and adaptation to his adult personality. He is, in essence, a spoiled rotten child in an adult body.
He wants to fit in everywhere, yet cannot seem to avoid forcing everything. He is searching for approval where he didn't earn any to begin with. The odd thing is that good examples of what Pete should aspire to become are all around him. His idol, Don Draper, is finally enjoying his marriage. Ken Cosgrove, his one-time rival, also enjoys being married and seems very well-adjusted. Joan and Peggy are moving on with their lives and work harder than ever at their jobs. When Pete keeps pushing to get what he wants (or desperately needs in some cases), there are indications that wreckage will follow in his wake.

Everything Pete does in this episode is wrong. He meets a pretty, young girl in his driver's ed class and openly flirts with her when he gets a chance. The flirting felt really smarmy to me, though. She's pushing the limit for being too young for him (probably not in the double digit range, but close to it to me since she's just entering college and he's already been working a few years), and he tries to come off worldly, wise, and possessing some money. It doesn't work the way Pete would like it to work. It doesn't come off naturally. Pete is like that guy who is off in the corner at a party, talking niceties only with those who are near him. The situation is completely cut off to him once "Handsome" Hanson enters the picture and hits it off immediately with the girl. Sure, he comes off as more appropriate for her age, but "Handsome" is one of those guys who can pull off flirting with a girl naturally. He owns the room, while Peter just sits there, stewing in silence. 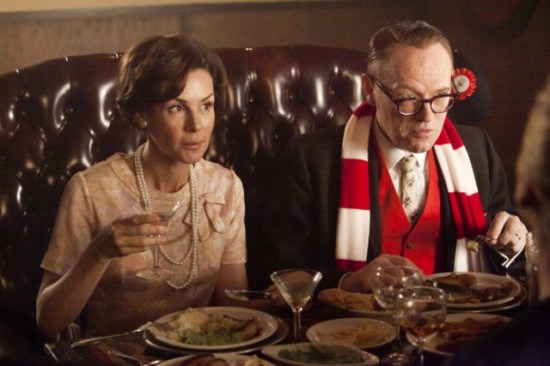 Pete can't fully fix the leaky faucet at home. He thinks he has it at first, but it bursts at the dinner party he throws later with Trudy, which is the worst possible time for him because it disrupts his need to impress everyone. Don compounds things by easily and permanently fixing the faucet while Pete fumbles around with the toolbox.

He pushes a funny situation that could have easily been defused into insult territory that prompts a fighting challenge from Lane. While the situation is rife with really funny moments (the "chewing gum on his pubis" comment; Cooper, Sterling, and Don watching the two of them have a fistfight in a conference room like it's a boxing ring), Pete gets his pride handed to him. The older, bespectacled foreigner wins the fight, leaving Pete completely humiliated. It's only in the privacy of the bedroom at the upscale whorehouse, where the prostitute cycles through the "king" fantasy, that he gets exactly what he wants. Imagine if Trudy found out what had really happened there. It'd be much worse than a fistfight.

The opposite end of the coin is represented by Ken's travails through the episode. His attitude that his day job is just a job seems to surprisingly be the correct one. He doesn't need the recognition from the job, and has found other avenues to satisfy him. We have seen throughout the course of the series that Don, Pete, Roger, and others have let their jobs in advertising define them. It's the sole thing that gives their lives meaning. It has already deteriorated Roger and is starting to do the same to Pete. They have not adapted to the world, and when that occurs, they are dying a slow death.

It was starting to drag down Don, but it seems like he's finally doing okay. It helps that Megan is challenging him and being the very opposite of the oppressive Betty. Betty would totally have tried to talk to Trudy to get out of the dinner. Megan forced him to confront Trudy and they ended having a not-so-terrible time at the Campbells. Betty would have succumbed to Don's drunken seduction in the car. Megan would have none of that.

Ken's science fiction story of the robot collapsing the bridge by taking out the bolt is highly allegorical of the situation Pete faces. He and Roger are the unyielding robots, following only what they've been told they should do all their lives, and then disaster follows. Ken is uncomfortable about his wife revealing that he's a successful author on the side, but he takes his lumps at work, then changes everything about it to keep it going. He invents a new pseudonym and adopts elements of his life into yet another poetic-sounding story.

It's hard not to like Ken here because while everyone on the show is seemingly descending into darkness, Ken is staying afloat. He doesn't internalize the demons that consume his co-workers. Everything comes so easily for him. I do wonder if the rivalry between Pete and Ken will get started up again in the future. Pete is the kind of guy who doesn't forget grudges and if he knew how Ken was living his life, it would certainly feed into his long-standing jealousies and insecurities.

This episode was a showcase for how corrupted Pete as a character has become. Even Joan noticed that "everyone in the office" has wanted to punch Pete at one time or another! How big a standing can you actually have amongst your peers if everyone has wanted to cause you physical harm? He sits in on partner meetings, but there's always a sense that he's the kid who has been invited to the adult's table then proceeds to reach for the food before everyone else does. While it may be true that the senior partners are also out of place in their own unique ways (Lane is surprisingly feeling useless here, where I thought his job was keeping the agency from floundering, which is incredibly necessary), they have worked hard to earn that place at the table.

Pete has not. That seems to drive his desperate need to get more recognition and power. Even as it's been clearly shown that he doesn't seem to know what to do with the things he already has. The job is not going to save him. He's going to need to find contentment in some other way. Can he do so with a minimum of damage, or will it be a complete debacle?