This ought to be the first episode of the second-to-last season of "Eureka", preceding a final six-episode season. But as most "Eureka" fans know, this was not to be. The impression I got was that the fifth season was virtually all "in the can" when the cancellation news hit, so there was a very real danger that "Eureka" would end without a real ending. Only one additional episode was produced to make up for this. It's a paltry victory, but it's better than no ending at all.
The previous season ended with a bang, sending the Astraeus crew (along with reluctant stowaway Allison Blake) hurtling toward some unknown destination. It was an exciting cliffhanger, made more so by all the time the show had spent building up to the launch of the Astraeus. By that point, it was a no-brainer that Beverly Barlowe and the Consortium were involved in the incident somehow, and had seemingly planned all along to take control of the mission at the last second and send the ship to a destination of their choosing.

Naturally, my mind immediately went to possibilities of a more "Star Trek" or "Lost in Space" variety. And part of me still wishes that something like this had occurred. But given that this show is, at its core, about the town of Eureka, it makes sense that the ship returned, or seemed to return, to it. And it isn't long before the crew of the Astraeus discover that this is not the Eureka they left, but a Eureka four years (and two months) into the future. My first thought was that this status quo was only temporary, but then I remembered that I had thought the same thing after the timeline was completely altered. Currently, those changes still hold true. 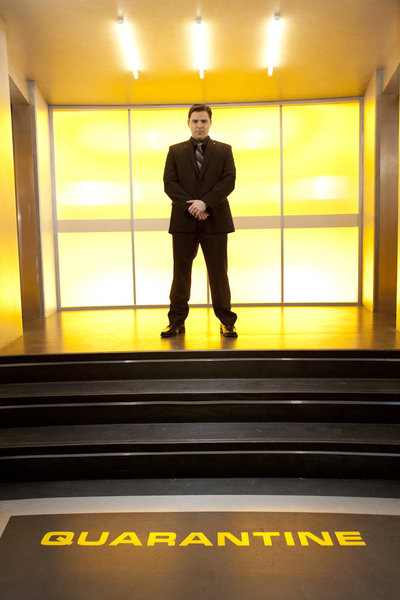 As the Astraeus crew begin to come to terms with this new reality, things slowly begin to grow progressively darker. This is still "Eureka", so there's still all the humor and heart you've come to expect from the show. But longtime fans will remember that the show is capable of taking some surprisingly dark turns when it wants to, and this premiere seems to be tapping into that darkness pretty heavily. The jump in time results in some changes that make the earlier timeline changes seem entirely minor and easily manageable in comparison.

As the episode went along, I began to accept this new status quo and become emotionally involved in it. This was how things were now, and the characters were just going to have to deal with it, hard as it might be. It's not unbelievable that Carter and Jo got together after they lost hope of finding Allison. And it's even more believable that Henry went a little nuts after Grace disappeared and stubbornly refused to believe that she was gone. Henry has already had to deal with a terribly painful loss in the not so distant past, so dealing with the possibility that Grace might be dead too would have been shattering.

Part of this new, more chilling version of Eureka, is that Deputy Andy is now in charge of Eureka security. But Andy is "different". Kavan Smith is always a joy to watch in the role, but he absolutely excels at playing a twisted, villainous version of his former self. The smiles and unrelenting optimism are both mostly intact, which seems to make Andy all the more terrifying, and funny at the same time. The remarkable thing is that the episode mostly plays it straight with Andy, treating him as a legitimate threat to be feared. He's not simply a joke villain; he really is out to get you. It's this uneasy shifting between laughing at Andy and feeling genuinely afraid of what he might do that is key to the character's success.

Ultimately, this is the "Eureka" you know and love. It's fun, funny, exciting, heartfelt, and even a little scary. Carter's jeep gets destroyed, Fargo is Fargo, Isaac Parrish is an ass (until he isn't, which is itself another hilarious scene), and science saves the day. There's just one problem: none of it ever happened. It's all just a simulation, created for the minds (and by the minds) of the top scientists in Eureka, who are now imprisoned in some dark room somewhere by Beverly Barlowe and the Consortium. So the only part of the simulation that was real were the scientists plugged into it (which apparently includes more than just the crew of the Astraeus).

There's a pretty significant hint that something like this might be the case about a third of the way into the episode, but I ignored it, hoping that the writers wouldn't pull something like that. But in the last few moments, the twist came. It might be a little extreme to say that it ruined the entire episode, but it wouldn't be that far from the truth. Why write such a strong episode and then totally retcon it at the last moment? A good twist ending can be powerful, when done right (ex. "The Sixth Sense"), but when done poorly, it can be absolutely ruinous. To be fair, this development does fit with the Consortium's motivations pretty well, and there's always the possibility that things aren't quite what they seem. So I'm trying to stay optimistic.

I feel very conflicted about this premiere. For the most part, this is another excellent episode of "Eureka" (in fact, it had the potential to be an all-time great of the series), and one that may very well be the start of another excellent season. But it comes packaged with a twist ending of the worst kind; one that all but totally undermines most of what made the episode work so well up until that point. I can't understand why writers still think that this type of ending can work, because it invariably doesn't. Now I just hope that subsequent episodes can provide some level of damage control.