The whole of this episode did not quite gel as I would have normally expected from this show. I think it's that everyone waited until near the end of this season to decide on the direction of Peter's gubernatorial race. The show hasn't spent a lot of time building to the decision made at the end of the episode so while I found it interesting to see where it goes, there's something of a hollow feeling behind it.
We have already seen Peter run in a political race before, and that filled much of last season, so it would be that again with some bigger stakes. A lot of the episode felt really disjointed to me, even as I enjoyed the political machinations that were imposed on Eli or the legal dilemma presented to the three clients that Lockhart and Associates were representing this week. The show is approaching the end of the season with a bit of uncertainty and less momentum than I was looking for.

The problem, it seems to me, is the quick turn of personality by Mike Kresteva. He had a fine introduction in "Blue Ribbon Panel" as the head of the investigative group. Deepening his antagonism towards Alicia, and now Peter, is the next logical step in his character development. Having it come this soon felt really odd. He suddenly throws his hat into the ring for governor, and his reasoning seems to be to stick it to Peter and Alicia by association. 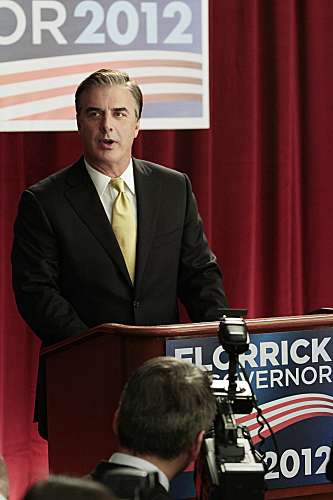 I did very much enjoy the second meeting Alicia has with Kresteva, where it's absolutely clear that Kresteva is lying through his teeth and sticking with that lie as if it were the truth. Alicia keeps insisting that Kresteva stop lying, but he clearly won't. Kresteva is not above playing dirty for his own political gain, and it took a couple of lectures by Eli (who is in full political operative mode here) for Alicia to finally recognize that.

I could have done without the incessant music cues telling the viewer that Kresteva is evil and not an upstanding guy. His words and actions are all the evidence I need to make that judgment. It's keeping disreputable characters like Kresteva out of major office that partly drives Peter's decision to run for the governor's office. The other big part of that decision is personally motivated.

The other patently obvious villain here is Jackie, and she coats her actions under the pretense that she wants to leave something for her children. She really only wants Alicia out of Peter's life. She has always doted on Peter and not particularly liked Alicia so I question what she's really doing here. Peter does as well, and takes his own mother to task on the issue, until her stroke occurs. While it would be incredibly difficult to fake a medical illness like that, it would not surprise me if Jackie was faking as a way to draw Peter's sympathy.

The whispered "I forgive you" to Alicia was chilling, if a somewhat nonsensical for what happened in the episode between the two women. It may not have worked in the short-term because Alicia is now supporting Peter in his race for governor, but that's not on real stable ground either. I don't think Alicia is fully ready to forgive Peter for what he did in the past, and that's going to be tested if she's only pretending to play housewife for political gain.

As for the Case of the Week here, it involves a murder from years ago and the possible release of all three of the perpetrators. Peter gives them an "Alford plea", an interesting legal concept wherein the clients are guilty in the eyes of the law but will go free immediately. The show sets all of this up well enough, even getting in the possibility that one of the three clients may have actually committed the crime in question. But that hardly matters since the other two take the plea and get their freedom.

We're unlikely to see these girls again so the show has to wrap up the storyline in the most expedited way possible. It didn't even seem like the lawyers trying the case really cared about the outcome. They have their own lives to worry about, what with Alicia and her personal drama, or the lawyer who becomes Will's temporary sexual conquest, and the moral dilemmas faced by their young clients seem rather feeble by comparison.

The show's oft-underplayed procedural element limits the emotional investment one might have in a case being tried. It wasn't all that interesting, and that was the overall feeling I got from much of this episode. Some parts were really juicy and drew me in. Others were just there, maybe as setup for what will happen by the end of the season, but had little impact right now. I'm confident the show can get back on track.