"Lost Girl" returns for its second season and slips back into its groove like no time has passed. And that's a good thing: too many shows return for their second season (or just a new season in general) and it feels as though they've lost momentum, like people are dragging their feet. The best premieres carefully tread the line of throwing audiences right back into the action and adjusting to some kind of new status quo, and "Something Wicked This Fae Comes" really nails it.
A good deal of the plot is about the aftermath of last season's "Blood Lines" and how our characters are still picking up the pieces. With the Ash still in critical condition, figureheads have taken charge of the Light Fae while Trick pulls the strings from behind the scenes, keeping things from getting too out of control in the absence of a proper leader. Bo and Kenzi are pitching in to help keep their turf safe from interlopers and Dark Fae who hope to take advantage of the Light's weakness and stake their claims or generally run amok. It's a nice new snapshot of the Fae world and just how delicate a balance it is, enough that that Bo, a neutral through-and-through, would all but join the Light Fae and take up Dyson's job while he's off dancing with wolves.

It's not a huge stretch, though, given that she's more concerned with keeping people (both human and Fae) safe than the politics of it all, and some of these interlopers are nothing more than scavenging monsters that need to be killed with fire for everyone's sake. The desperation also shows in how tight-knit the core group of characters has become, with Bo, Kenzi, Trick, Hale and even Lauren operating as a unit despite all the questions of loyalty and whatnot that were flying around last season. 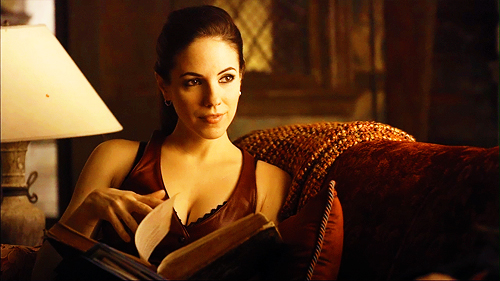 This is all part of the state of play that gives rise to the premiere's A-storyline, which starts – as good PI stories do – with a murder. With the usual Fae cops occupied, Bo and Kenzi are press-ganged into investigating a Fae kill discovered by the side of the road, completely flayed. Their investigation leads to a travelling carnival of Fae who use the circus gimmicks as an excuse to live (relatively) free and in the open, and who take responsibility for the death because of a mindless animalistic Fae among their numbers who's usually kept locked up. However, the group soon discover that these carnies are another group of Dark Fae interlopers who want to take advantage of the Light's weakness.

A lot of veils and curtains are pulled back about how the Fae are organised as figureheads and genius loci all factor into the investigation, and between some good mystery writing, genre setup and a wonderfully dark and dissonant locale for the climax, there's real tension running through this episode. It's more than just "back to the grind": it's a fantastic A-story that seems to demonstrate in a microcosm how the show has evolved and where it will be going over the course of season 2.

The other big story thread being picked up after the season one finale is the Bo/Dyson relationship, which had, for a time, emerged the clear victor of the love triangle. That is, until Dyson went and sacrificed his love for a chance to help Bo survive the battle with her mother in "Blood Lines". Much of the episode was spent dancing around what the exact consequences of this would be, but it didn't feel like a tease – on the contrary, it's entirely rooted in Dyson as a character, and his reluctance to put those consequences to the test by avoiding Bo as much as he could.

It added more tension to the already pretty-damn-tense A-story and made the episode all the more engaging for the audience, who are left to peek and observe and try to figure out what's going on. Hale even comes out and suggests it at one point, "what if the curse didn't work?", and there's a definite ship-tease moment during the climax that would make anyone wonder which direction the writers are gonna take things. It all builds up to a wonderfully emotional climax and opens the door for more interesting character stores as the season goes on.

To put it simply, this was a fantastic premiere. The story and characters remain engaging, the world of the Fae feels a little more open and there's all kinds of new arcs in place for future episodes to explore, not the least of which is a nice little portent of doom in the tag. No one's missed a beat here, and "Lost Girl" proves it's willing to evolve, able to avoid stagnation and just as fun and entertaining as ever.