After a bit of a lackluster start, which honestly felt like Neil Jordan trying too hard to get the ball rolling again, “The Borgias” bounces back with a strong follow-up to events from the first season. While Lucretia continues to be the weakest link of the show, Juan Borgia finally comes into his own.
In the first season, it would have been easy enough to forget that Juan even existed. When it came to the Borgia children, most of the time was spent on Cesare’s fairly charming violence and Lucretia’s marriage issues. Juan’s main role was to be the brother who had the role that Cesare wanted. (So much so, that the sibling rivalry in the previous episode felt somewhat out of place.)

Lucretia’s sudden reunion with Paolo, the father of her child, gave Jordan the trigger needed to focus on Juan’s character traits. While all of the Borgias have a sense of entitlement, Juan seems to bear that banner without reservation. Before knowing anything about Paolo, he is ready to kill him for merely speaking to Lucretia. It’s a twisted kind of protective love, befitting of a Borgia.

Jordan continues to do everything possible to make all of the Borgias a mixture of sympathetic and depraved traits. It’s often been said that Cesare could be mistaken as a heroic figure, given how he is usually depicted. This episode is all about how perception and appearances can be deceiving. Cesare, Juan, and Micheletto all present a pleasant face, but end up committing various acts of violence and, in two cases, murder. Lucretia plays the dutiful noble, but sneaks away to be with her lover. Rodrigo, along with Guilia and their mutual plaything, walk about the city at night, playing at being commoners. 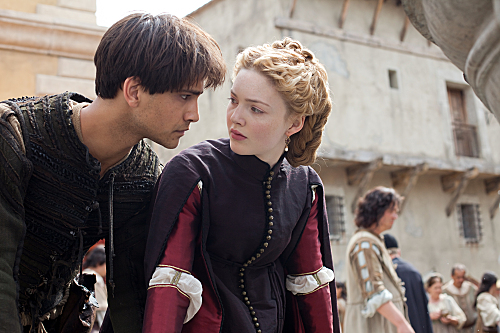 Whatever the reason for Rodrigo’s interest in the common people of Rome, it did give a basis for some of his more charitable actions as pontiff. His decision to clean up the streets of Rome and ensure that funds for the poor were properly utilized did show that he was capable of doing more than accumulate power. On the other hand, when all is said and done, it is essentially a trifle to him, a whim in the name of a new lover.

Rovere’s subplot found some movement in this episode, as he continues to recover from the assassination attempt in the premiere. History tells us that Rovere eventually does gain the power to strike back at the Borgias, and that he does so by becoming the very thing he despises. While the robbers (and would-be rapists) in this episode deserved their fate, Rovere’s casual killing said much about where he is headed.

If there is one glaring problem with the episode, it is simply Lucretia. Many of the scenes in this episode revealed part of why I still struggle to accept Holliday Grainger in this role: she just doesn’t portray passion very well. Not just the sexual kind, though that was a part of it. She is usually all too restrained, as if holding back, yet when the circumstances call for it, her more explosive moments just don’t ring true. Especially in this episode, where I wanted to set aside my reservations and enjoy the ride, it felt like a certain intensity was missing, especially in comparison to Juan.

Episodes like this keep me engaged enough to watch “The Borgias”, especially when the tone is more consistent and Jordan doesn’t attempt absurd comedy. It’s not as captivating as “The Tudors”, and doesn’t have the range of “Game of Thrones”, but it still has the potential to find its niche, if this is the template for the future.