SciFi Vision | All Reviews | Television Reviews | Game of Thrones 2.3 Review: "What Is Dead May Never Die"

Game of Thrones 2.3 Review: "What Is Dead May Never Die"

Apart from the ending, this is still a relatively low-key episode. Much of what we've seen so far has been the forebodings for the massive conflict that is soon to ensue in Westeros. War is here already, but the scope of the conflict expands with every episode, as one new player after another is introduced. And seemingly all of them want the Iron Throne for themselves, except for Robb Stark. His fight is one of vengeance and independence, which currently makes him the easiest one to root for, at least in my opinion. However, I'm sure that viewers all have their own favorite team. The pre-season marketing blitz cleverly capitalized on this team-based division of the characters, so I'm sure plenty of interesting viewer data resulted from that.
The show is still called "Game of Thrones", but one could argue that it's better to make-believe that the show has been re-titled "Clash of Kings" for this second season (I'm removing the "A" to fit with the official show title). "Game of Thrones" still fits, of course, because the conflict is still essentially centering on the Iron Throne. And we still have Tyrion playing the "game", in the same meaning that the word had in the first season when Ned Stark inability to play the game properly resulted in the loss of his head. But the title doesn't quite do justice to the expanded scope of the story as well as "A Clash of Kings" or "A Song of Ice and Fire" would. Still, it's just a title, and hardly worth pondering over for as long as I have already.

The resolution to the previous episode's cliffhanger might be a bit anti-climactic, but I enjoyed the layer of spookiness present in the ensuing conversation between Jon Snow and Jeor Mormont. Jeor's final words to Jon ("Whatever it was, I dare say you'll see it again") were ominous enough. I've probably said before that I find Jon Snow to be a bit of a bland character, at least in comparison with most of the other characters on the show. I don't know whether it's the writing or just the performance, but Snow has always been a bit too much of the generic young hero type (which could easily change as the character develops). Regardless, I remain very intrigued by this story thread. The mere mention of anything monstrous north of the Wall is enough to get me excited. 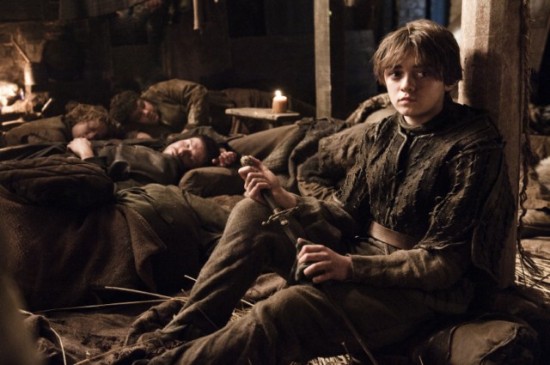 For many viewers, the highlight of this episode will no doubt be Tyrion's further activities at King's Landing. Not one to sit idly by and hope that all goes well, Tyrion is constantly scheming new ways to reduce and eliminate any threats surrounding him. This work may be his best yet. Not only does he successfully root out Cersei's spy in the small council (poor old Grand Maester Pycelle), he also manages to take significant steps toward securing Petyr as an ally (baiting him with riches, as well as his most human weakness: Catelyn Stark). Varys is still a bit of a wild card, so Tyrion seems to be following the "keep your enemies closer" axiom in that regard. Varys is enough of an ally for now to help Tyrion get Shae a new identity, but I think he's still the most worrisome threat. I haven't forgotten his secret rendezvous with Magister Illyrio back in season 1.

Theon Greyjoy's decision to betray the Starks and join his own blood in their conquest of the North is probably one of those things that worked a little bit better in the book. The burning of the letter was a reasonably effective means of displaying Theon's inner conflict, but it seems as though it's all over rather quickly and suddenly Theon is pledging himself to the god of his people. It may be that this was the best that could be done to make the material work in the available screen-time, but Theon's reasoning behind betraying his adopted family for the one he barely knows anymore still seems fairly cryptic. Perhaps subsequent episodes will better elaborate on this. Theon's choice is bound to have devastating consequences, but I find Theon to be sympathetic enough that I hope he comes to his senses before it's too late to turn back.

A good deal of screen-time is spent at Renly's camp, introducing new characters and further developing old ones. I remember Renly as being a rather timid fellow back in the first season, but he's significantly grown in power and confidence, amassing a large amount of troops and popular support. Catelyn's criticisms may yet hold true, but he's a much more impressive contender than I ever would have expected him to be, simply from watching the first season. Margaery Tyrell looks to be an especially interesting addition to the show. The nature of her involvement with both Renly and Loras was spoiled for me by one of those promotional featurettes, but I'm still quite impressed by that twist on her character. She's a lot more intelligent and capable than a first impression might suggest.

It seems pretty obvious that Bran's dreams are more than just dreams. The way they're framed in the story makes it virtually a foregone conclusion that something big is going to come of them. Kudos to the crew for doing that cool, first-person shot from Summer's (I believe that's the name of Bran's direwolf) perspective. It's not often that the show develops such an openly mystical feel, but that scene between Bran and Summer was pretty effective at making the supernatural feel close at hand. This is all quite relative, of course. The supernatural elements are still being kept nearly as subtle as they were in the first season, so far anyway. But Maester Luwin's bedtime talk about dragons, giants, and "children of the forest" certainly served to stir the imagination.

But what sticks in the mind the most from the episode is that harrowing final scene. I was a bit surprised to see Yoren killed off so early in the season, and I'm slightly disappointed to see him go. But he at least went out in a sufficiently memorable fashion. For a moment, I thought that that crossbow bolt would be the end of him, but it seems Yoren wasn't quite finished living yet. His and Lommy's death comprise one of the more shocking scenes in the show (which I feel like I'm saying almost every episode now). And all this comes barely a minute after Yoren's heart-to-heart with Arya, which has a strong thematic connection with the subsequent violence. Yoren provided a sense of security, and felt like a lingering connection to Ned Stark, so I suppose it makes sense to take him out of the picture and leave Arya and Gendry to fend for themselves. It will likely give both characters the chance to grow.

Arya is already getting started on that growth, rushing to free the men in the cage (at least one of whom still seems mysterious and important) and brilliantly taking advantage of Lommy's death and proximity to Gendry's helmet. That story may not hold up forever, but it at least ought to buy them all some time. Arya seems to grow more hardened and fierce all the time. If she's like this now, just imagine what she'll be like as an adult: not someone to be trifled with, I suspect. She's been accused of having "more courage than sense" already, but her quick thinking here suggests otherwise. This story thread remains one of the least predictable of the season. I have no idea where Arya and Gendry will go from here, but it seems likely that they'll remain together, at least for the near future.

It seems like something "game-changing" happens on virtually episode of "Game of Thrones". I'm sure that isn't quite the case, but the show certainly does lend itself to that impression sometimes. In the premiere, it was Joffrey's men murdering all of the Baratheon bastards and going after Gendry; in "The Night Lands", it was Jon Snow's dark discovery; and in "What is Dead May Never Die", it's the Lannister's men living up to their earlier promise. Last year, I found that the season followed the three-act structure pretty well, broken up into three, four, and three episode chunks. At the end of each act, I expected something big to happen. So far, this season appears to be no different.