As the season drives towards the season finale, the writers are definitely trying to improve on their game. While one of the core criticisms of the show is still left unresolved at the end of the episode, other factors balance that out and more, so the overall impression is that the show might finally be finding a solid direction.
Part of the equation is getting back to little details from the pilot that haven’t been addressed much at all. While Adalind has been working on Hank for a little while now, her purpose relative to the events of the pilot wasn’t clear. Now, it seems to have a great deal to do with the key that Aunt Marie gave Nick, which I had forgotten about completely. The key is related to the map that its casing produces when used as a stamp; a town called Burow, actually a real place in Germany, is shown.

One could speculate that this map leads to the source at the center of the Wesen/Grimm conflict, especially given how important it is to Renard and his family connections. Renard was apparently tasked with the job of getting the key from Nick or simply forcing him to work on Renard’s side, which explains why Hank was prepped for use as leverage. Assuming that Renard’s family is trying to maintain control over the Wesen, and sees Nick as a threat, given his status as a bit of a maverick Grimm. (Which begs the question: are the rest of the Grimms out there in league with Renard’s family? Or could the Grimms be a kind of Wesen themselves?) 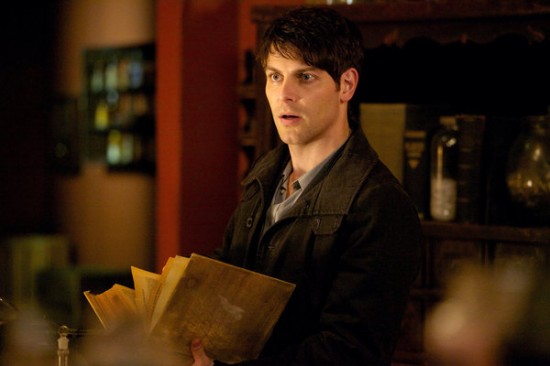 This episode starts peeling away the layers of the mystery, but there’s still quite a bit to tell. Adalind’s bid to control Hank, and therefore Nick, hits a snag when Team Grimm figures out how to reverse the spell. Hank is saved, and Adalind is rendered powerless and normal. It must be clear to Renard that Nick is working with allies now, and even if it’s not as apparent as all that, Nick should be thinking that protecting his friends is now a high priority.

So it seems a bit ludicrous that the episode ends without Nick coming clean to Hank. Nick has just seen the result of keeping the Wesen a secret, and it has nearly killed both Hank and Wu in the space of about a day. If the next episode doesn’t address this directly, then I just don’t know what the writers are thinking. There’s preserving a premise, and then there’s doing so beyond all logic.

Meanwhile, despite the fact that Renard is still doing what he is told by his family, there are definite signs that his personal goals are less draconian. For whatever reason, he doesn’t want to turn Nick over to his family, and I’m not even sure he wants to turn over the key. And since he’s been protecting Nick in the past, one might even suspect that he wants to convince Nick to help him deal with family politics. Part of the story is definitely still missing, and hopefully we’ll get it soon.

I still feel like this show is David Greenwalt’s attempt to reboot “Angel” without the obvious ties to the Whedonverse, but it’s becoming less and less of a crutch as the show finds its own voice. Now that the scope of the show is beginning to widen more, I’m more intrigued by where it could go in the second season. If they would only resolve the plot hole of keeping Hank and Juliette in the dark!