This episode is an effective follow-up to the previous installment, ramping up the final endgame with David Robert Jones and pointing towards the identity of the true Big Bag for the season. It’s been hinted since the fourth season premiere, but now there is much more evidence that the Observers are up to no good.
I was initially annoyed when the cause of the cross-universe incidents wasn’t immediately connected to Mr. Jones and his “geological” experiments, because it hasn’t been that long since the last set of experiments in Westfield. And for that matter, it took them far too long to connect the dots in that earlier incident, so it seemed a bit of a convenience to allow questions to linger. But it occurred to me that was the purpose: giving the audience time to make the connections and consider the implications, to internalize the situation.

This was a great chance to see Lincoln working well as Fauxlivia’s new partner, and despite her recent loss, there’s no holding back the saucy ginger for long. This also completed the job of getting her and Walter on the same page, with past transgressions and misunderstandings a thing of the past. Knowing that the Fringe Prime universe has become revered for helping to repair the damage to Alt-Fringe has helped to give context to past antagonism; actions were based on false assumptions, and those have been rectified. 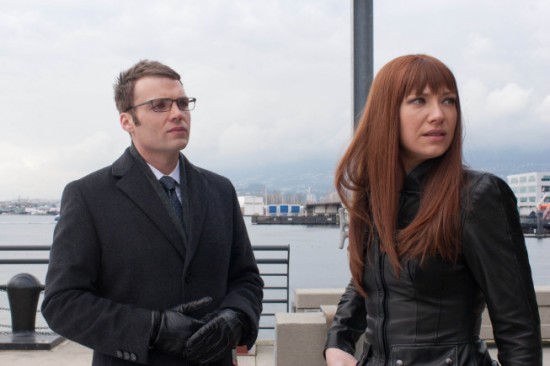 But as much as this episode was supposed to be about Walter bringing his special skills to Alt-Fringe for a while, this was just as much an episode devoted to Broyles. In the third season, Alt-Broyles found himself at a crossroads between the security of his family and the moral choice to help Olivia get home. This episode covered many of the same beats, only in terms of Alt-Broyles’ involvement in Mr. Jones’ grand plan. While it hasn’t led to his death as yet, Alt-Broyles makes a similar choice.

In terms of Mr. Jones’ plan to use the Machine to collapse the two universes together, we’ve already seen what kind of catastrophic effect this would have on the world as a whole. Take that to a universal level, and it’s quite possible that there wouldn’t be many people left in whatever universe remains from the fusion. His development of the hybrids, however, now makes sense. If his purpose with ZFT in the first season was to activate humans with abilities to counter the Alt-Fringe incursion, then his current work is designed to produce humans that can withstand and flourish in the post-collapse universe.

All of which means, ultimately, that there is anticipation of a future that would result from the collapse. And who would be most interested in an endgame that would, ostensibly, force the future down a specific road? Consider that there are two individuals that would likely be capable of surviving the fusion-collapse: Peter and Olivia. Peter, by virtue of being unique between the two worlds, and Olivia, by virtue of her Cortexiphan abilities. (For that matter, Lincoln and Fauxlivia could end up surviving together, if this logic holds.) If Peter and Olivia are supposed to mate and produce a bloodline that leads to the Observers themselves, then this would be one way to end the interference that the dual-universe interaction represents.

The best part about this turn of events is that it is consistent with what has been presented all season, and even points to a clear scenario for the end of the season. If the producers have made contingency plans for potential cancellation, one can see how they could resolve the major plot threads by stopping the threat of Mr. Jones (and presumably the Observers) once and for all, or continuing forward with whatever set of consequences they might already had in mind. Either way, I suspect these next four episode to round out the season will be a wonder to behold.