Continuing with Michael's increasing mental breakdown, the show has ventured into auditory hallucinations. Listening to instructions from a drive-thru ordering machine may be unorthodox, but that's par for the course with a show like this. It leads to a subplot that doesn't really go anywhere, and exposes the weakest part of the plot (the conspiracy) as well.
If it turns out the conspiracy is a product of Michael's overactive imagination, then investigating the Westerfield case could be regarded as an introduction to what's really happening with Michael and his family. Otherwise, it's a dead end. Hannah and Rex make small appearances in the episode so this is showing a pair of cases that once again caters to Michael's specific skills as a detective.

Both cases presented to the detectives seem to be solved easily. A girl throws herself off a roof, and the last person who saw her alive is booked because they had consensual sex that looked in truth to be a rape case. A man is found buried in concrete, and it turns out to be a missing person from three years before. The cases are both tied to a concept presented in the episode called "pentimento", where an artist will draw over the initial picture with another design. The missing person case is broken by Michael in this way when he sees the dead man's brother sporting a tiger tattoo that is covering a tattoo of the Devil. The man is obviously the guilty party, although his motives hardly merited the extreme measures by which he carried out the crime. The man tried to "erase" his own brother, killing him, then taking his identity. 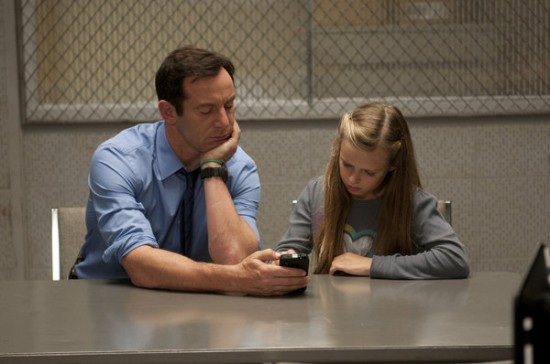 The young girl's suicide is an even more disturbing case. The rape by her study partner doesn't hold up when it's discovered that she had been raped before that. The suspect is really obvious here as well, with the girl's father being the one to peg for the crime. He'd been molesting and raping the girl and her sister to the point where the girl committed suicide because she was pregnant by her father. Again, she tries to "erase" what happened to her by having sex with a couple of men and pinning the pregnancy on whoever was willing to have sex with her afterwards. She can't eliminate her shame and guilt, thus leading to the suicide.

It's Michael who discovers the truth by tracing something out of nothing from the clues, but Captain Harper confirms the entire sordid affair by neatly coaxing a confession out of the girl's little sister. We've seen very little of Captain Harper in both worlds on the show so this was welcome, even if the confession is police procedural cliche. Instead of talking about vagaries concerning the conspiracy, she tells the girl that women need to be strong and show little vulnerability as they grow up. Harper would know this since she is in a power position that many women don't get. This makes Captain Harper a much more well-rounded character instead of a cipher for the conspiracy plot.

I'm coming around to the theory that the conspiracy plot may be Michael's brain rationalizing his predicament after the crash. Investigating the Westerfield building yielded very little ultimately, yet Captain Harper and her compatriot claim that he's getting closer to the truth. It's hard to know what comes of it since the only connection seems to be the taco restaurant that leads Michael to the location in the first place. Also, since Michael is not present for any of the phone conversations between the captain and her co-conspirator, that lends credence to his mind working out some explanation for why the accident occurred.

The ultimate goal for the conspiracy seems to be getting Michael out of LA, and they've accomplished the first major step in doing so with his resignation from the LAPD. Does this mean the Hannah world is reality and that he has lost his son? Perhaps, but this could well be a very elaborately disguised head fake. The show seems better in my opinion if the writers can keep up the questions about which world is the real one. It could still be that neither reality is real, and that both Hannah and Rex died. Anything is really possible at this point. The ratings are getting worse apparently and more of this story is doubtful, so I'm enjoying the ride while it lasts.