In this episode, Jake tosses out a random number, demonstrating his superior otherworldly intelligence, while his father Martin is sent on a bizarre quest to determine the number’s meaning, strangers’ lives intersect in super-convenient ways, and foreigners who embrace Western values are saved by high speed internet. Sound familiar?
There’s no doubt that Martin loves Jake more than anything in the world, so the majority of the drama is going to focus on the notion that they might be separated. Unfortunately, the story so far has done more to justify such a prospect than counter it. When Jake doesn’t manage to place himself in serious danger, Martin is running around like a madman, getting into situations that are equally dire. Yet, the writers go out of their way to make those living in the “conventional” world look cruel and unyielding.

As usual, the hidden interconnectedness of the universe involves an amazing amount of leaps of logic to make it all work. Martin’s personal journey gets him to the point where a number and mathematical design allows him to link an armed stranger on a bus to someone looking for a vital transplant. Martin sees the last name on the screen, realizes that it’s the stranger’s name, and immediately leaps to the conclusion that they must be related, thanks to Jake’s provided insight. 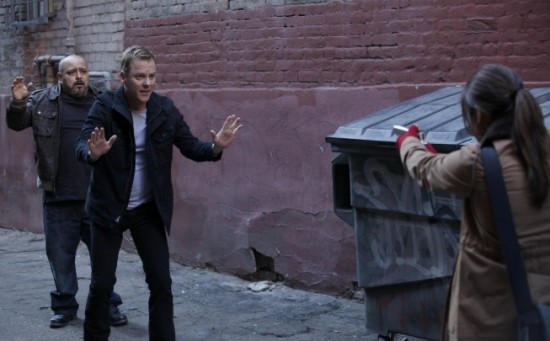 I was secretly hoping that there would be no relation, revealing that Martin was jumping to conclusions based on tenuous information. But of course, that’s not the kind of show this is. Jake will always be right, and the connections will always benefit those in some kind of personal need. I’m sure many people find it uplifting, but I’m already finding it overly manipulative.

Imagine how Teller’s subplot might have played out if Martin had been wrong. Let’s say, for a moment, that Martin was on the right track, but his desperation to find meaning in the numbers led to incorrect conclusions. It would mirror what Teller’s daughter was saying, and toss some much-needed tension into the story. After all, Jake is the one that understands, on some level, what the numbers mean; Martin is interpreting on the fly. Mistakes ought to be made. Wouldn’t it be interesting to see the consequences of Martin getting it wrong for once? Just to show that disruptions in the tapestry have negative consequences?

“Touch” has its fans, especially among those of a more spiritual bent. There’s room for a show that’s positive about the world and the idea of bringing people closer together. I just wish the writers would rely less on convenience and emotional manipulation to sell the idea.