All of the focus this season on "Justified" has drifted from three main villains in Boyd, Limehouse, and Quarles. The ignored small-time criminals were Johnny Crowder and Arlo. Being loyal lackeys for Boyd through the season can do that. One figures very much in this episode and the other sets up things for future stories in the next season. For now, Raylan goes hunting for both Quarles, who is suspected of shooting and killing his State Trooper friend. It's an exciting, often tense, dangerous journey through many parts of Harlan. The episode pays off a lot of the little subplots that were presented through the season, some in rather shocking ways.
The first logical suspect for Raylan to investigate in Trooper Bergen's death would be Wynn Duffy since he was a witness and he had been recently collaborating with Quarles. Raylan brings up the Harlan roulette game from earlier this season to intimidate the information out of him. Like Quarles' slow descent into oblivion this season, it's so enjoyable to see Raylan once again get one over on Wynn Duffy. Duffy doesn't pan out, however, so Raylan's next option is to squeeze information out of Limehouse.

Limehouse proved to be the star of this episode. He's playing all sides at this point, even against Boyd by using Johnny as an informant. Johnny's quest to bring down Boyd from atop his perch should be something to watch next season. It almost worked, as Boyd went to jail for Devil's murder. Yet another seemingly forgotten past storyline that comes back here.

The show's sense of continuity has always been outstanding. There was no way for Johnny to know that Arlo would take the fall for Devil's murder in order to protect Boyd. But Limehouse seems to be doing what he does to ensure that his people are left completely alone. That includes getting rid of Errol for screwing up pretty much everything he's been doing this season. Limehouse's knowledge of his people's history, the attachment he has to it, makes his dismissal of Errol a good mix of business and personal. He expects survival and is willing to do whatever he can to get it. 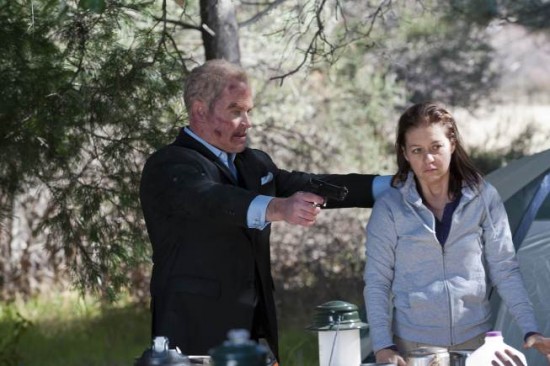 Quarles has proven too slippery for his own good at this point. He happens upon a family that he proceeds to kidnap at gunpoint. It could have ended up being a messier situation than it ultimately turns out, especially when he forces the mother out of the van. Given Quarles' history with young boys, you couldn't help but worry about their fates as Quarles did whatever he could to get back in Theo Tonin's good graces. Raylan ends up in his clutches as well and I kept wondering if Quarles would go through with the threat to shoot Raylan from earlier this season. I guess his need for money trumped the urge to kill Raylan. The money came from an unexpected source: Limehouse. He stored a bunch of money in the most unlikely of spots: One of the pigs he'd been chopping up all season. It was a literal piggy bank!

All of the storylines in the episode come into play in the faceoff between Limehouse and Quarles. Errol comes back to the slaughterhouse, shoots Quarles, Raylan and Quarles struggle, right before takes a cleaver and chops Quarles' gun arm right off! So very violent, and yet oddly satisfying to see that the Derringer gun rig ultimately kills Quarles. As he's dying, he reveals that Arlo was the one who actually shot Raylan's State Trooper friend.

The reasoning behind his shooting the Trooper made a lot of sense, too. He saw a man in a hat (the hat looked a lot like Raylan's trademark Stetson) threatening Boyd so he shot and killed him. Arlo hates his son that much. He protects Boyd in multiple ways during the course of this episode in part because he has become senile without his meds, and because he has been with Boyd's gang for a long while. Blood doesn't trump loyalty when it comes to the two Givens men. Raylan seemed to expect this from his father, so as to explain the less-than-caring attitude he displays to Winona when he tells her the whole story. Raylan is more worried in that final scene that he might turn out to be more like his father than he can really admit.

It's unlikely he will be a large part of his child's life (through circumstances that aren't really his control), and that absent parenting might irreparably damage the child. He should break the cycle, but there really doesn't seem to be a way for him to do that in the immediate future so he is resigned to the uncertain fate of his progeny. That mindset is great for his job, but terrible for everything else in his life. Raylan survived a time where he was surrounded by bad guys once again. Is the job worth sacrificing his impedning fatherhood? That's a price he'll have to weigh in the future.