The Borgias 2.1 Review: "The Borgia Bull"

I’ll be completely honest: I wasn’t particularly thrilled with the first season of “The Borgias”. I think that came through fairly clear in my reviews. Part of the problem is the distressing sameness of the episodes; since all bear the heavy-handed stylistic mark of Neil Jordan, there’s less of the creative variety that allows a show like “Game of Thrones”, for example, to play on expectation.
I also felt that the decision to begin the series so early in the papal reign of Rodrigo Borgia was a bit of a disadvantage. While it gives the writers time to build Lucretia and Cesare (and to a lesser extent, Juan) into the infamous historical figures that lend so much to the Borgia legend, it means that we have to endure the long road getting there. And as good as Jeremy Irons is as an actor, he’s not exactly the one we want to see rolling in the silken sheets of Roman decadence.

This second season premiere does try to make up for it (and the audience’s general lack of memory of the first season) by focusing a great deal on Cesare, who is arguably the one with the most dynamic character arc. Forced to play cardinal for the sake of family ambition, he wants to be in the military position afforded to Juan. This is a good excuse to stoke the fires of sibling rivalry, which I don’t recall being so overt in the first season, but helps to add some tension. 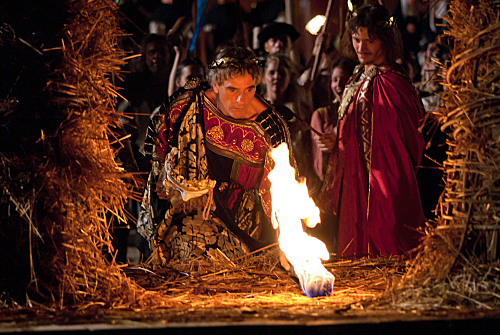 The writers are also bringing back the creepy sexual tension between Cesare and Lucretia, which is pretty much all that Lucretia is given to do in this episode. I’m still not pleased with the casting decision here; Holliday Grainger just doesn’t seem to fit well into the role. Part of it is anticipation of a more seductive personality, which has been a sticking point since the beginning. But something about Grainger in the role just isn’t working for me, and I can’t put my finger on it.

The episode is dominated by Rodrigo’s carnal desires, and an examination of how he has already begun straying from his relationship with Giulia. The fact that Giulia felt so threatened was a nice bit of awareness; she’s no fool to think that she’s immune to becoming a castoff. I felt like Jordan was playing with his own audience a bit with the reveal of the new mistress; perhaps an intentional reversal on that twist from “The Crying Game”? Whatever the case, they cast a young woman who can believably play a young man, given her figure, which also allows Jordan to make clear that Rodrigo is willing to sleep with anyone of either gender.

Still, a great deal of time was spent reminding the audience that Rodrigo is all about gaining power of all flavors, and indulging in the spoils thereof. As I mentioned, there’s only so much thought about Jeremy Iron’s bedroom encounters that I wish to contemplate on a regular basis, and this began to exceed the limit. Adding the counterpoint of the French King’s vengeance on Alfonso was particularly gruesome.

As with the first season, some parts of the episode seemed to last forever, while others didn’t seem to fit the tone of the rest of the episode very well. The very beginning, with Rodrigo flailing about to prevent Guilia from learning about his latest conquest, followed by the silly scene with the baby, could have come out of a parody of “The Borgias”. The intent is clear enough, but like so many such moments in the first season, the shifts in tone were jarring rather than organic. In the end, though, I think the fault is more in the direction than the writing, even if the weaknesses in both fall on Jordan’s shoulders.