Nightmares are inherently scary. When people have them, it's usually in bed, at home, both places that are considered sanctuaries. This episode of "Mad Men" was about what happens when those sanctuaries are violated, intruded upon, and how we deal with such things. We invite strangers into our homes and beds sometimes. It usually turns out well, but every so often, the risk of having strangers in a place of comfort can yield horrible results.
The various characters featured in this episode see their nightmares play out. Don in a very literal sense of the word, as his past comes back to haunt him. Sally with her curiosity over some infamous mass murders that made national news at the time. Peggy working longer hours than necessary, putting her in a situation where she and Dawn would be vulnerable. Joan, who is playing out a much more mundane scenario but nevertheless confronting the distressing reality of her marriage. They come up with solutions to these nightmare problems of theirs, and that should reflect in the events to come later in the season.

It feels like Don and Megan have to deal with Don's past transgressions and affairs for as long as they're married. Megan had to know this is what she had to deal with when she took Don as a husband. She was aware of Dr. Faye from last season. To Don's credit, though, he curtly put Andrea in her place right in front of Megan in the elevator. Through the course of the episode, Don remains faithful to his new wife. It doesn't look like he smoked in the bar after the pitch meeting with the client. He can at least function enough to chastise Michael after the odd Cinderella alternative story. Maybe it's the combination of hearing that dark pitch (which involved a woman being pursued in a dark alley by a stranger that weirdly fits with the creepy theme of the episode) and his increasing fever that contributes to Andrea showing up in the apartment.

The show doesn't give away its hand with the scenes of Andrea and Don in the apartment. The first encounter between them seems very plausible given Don's history on the show. The second, where she tells him that she'll still come around, causing him to act out and choke her to death, was less so, though I found it difficult to get over the shock of the murder. The reveal the next morning of all of it being a fever-induced dream felt jarring, and yet strangely fitting. Outwardly, Don is demonstrating a growing fidelity to Megan. Internally, his adulterous nature may never fully go away. 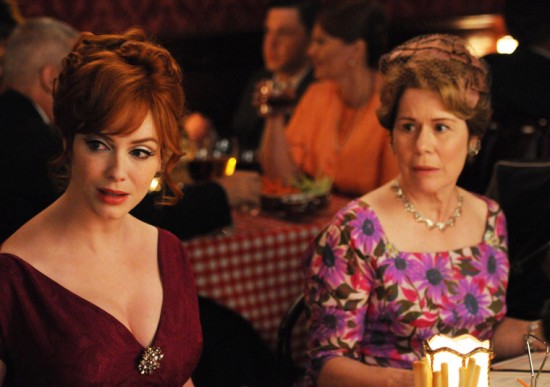 Andrea's inappropriate seduction and shocking murder is a nightmare in the literal sense. It is also the worst possible scenario that occurs when a stranger comes into your home. We know Don is a dark person, unable to escape his demons, so the possibility that he will act on those dark urges is not as remote as it might appear on the outside. When he awakens, he sees Megan bathed in angelic light. Andrea's body (without one shoe, like Cinderella) is gone. Can he be saved?

Contrast that with the mass murders in Chicago that made national news at the time. One man walking into a dormitory and systemically raping and murdering eight student nurses. He did act on those baser urges to kill people. It was sensationalized, and as such, provoked a lot of curiosity from everyone. The copywriting staff of SCDP particularly took note, and that informs on what happens during the rest of the night. Peggy extorts money from Roger to work extra time on ads for Mohawk Airlines, then ends up briefly fearing for her life when she looks around an empty and dark office. She only finds Dawn, who sleeps on Don's couch because she fears going back to Harlem.

Both of them share beers while staying in Peggy's apartment, but it felt to me like something was askew about everything there. Peggy talks about her struggles of being a woman in a male-dominated field and that she may lack the ability to adapt her mindset to fit the job. It's nothing really new and I thought it might have worked better as some internal monologue to herself. Nevertheless, Dawn can sympathize at some level, being that she's a black person in a place dominated by white people. Peggy likes to think of herself as progressive (she did go from the steno pool to middle management, a career track denied to many women in that era), but still harbors the prejudices of that time. One brief glance at her purse on the table, left there next to Dawn with a large amount of cash inside, and the tide of progression takes a small step backwards. Peggy is ashamed of what she's thinking in that moment, even with Dawn knowing exactly what that thought is, and Dawn has never given any indication that she's untrustworthy, yet it still happened. Will it be forgotten, or will it be used by Dawn at another time to point out Peggy's hypocrisy?

Sally is even curious about the murders. Since she's stuck in that giant house with her horrible paternal grandmother, it's all she really has. The salacious details of the murders from the newspaper, paired with the horrible child abuse backstory Pauline tells Sally, keeps the poor girl from sleeping. It's a regular house of horrors in there. I thought Sally was too young to hear such things, but that she won't be able to resist knowing about it, and that lends an air of sadness over how things end up.

Pauline gives her Seconal, and she ends up curled underneath the couch (a common hiding place for people when their homes are invaded) with her grandmother holding a carving knife while she's asleep in the adjoining chair. The image at the end is quite darkly comic in a sense, especially when Henry walks in and wonders why his mother could be holding the knife. If only he knew what went on during that night.

Though, that isn't true with the episode's other domestic storyline. It was hard to make of how things were between Joan and Greg. He returns from Vietnam, presumably for several weeks at first to get to know his infant son. It seemed like Joan was just happy to see him because it meant she'd see less of her domineering mother. Their being so in love with each other can't quite mask how much of a sham the marriage has become. The marriage seemed to rot right there before our very eyes. Greg lies to Joan and her family, telling them that he volunteered for another tour of duty in Vietnam after just ten days of being home. It's the straw that broke the camel's back.

I will admit to feeling a small sense of delight while watching the scene of breakfast after the disastrous dinner the night before (complete with a sly nod to Joan's accordian playing). Joan tells Greg off, saying that among other things, he's never been a good man, she can manage without him (that's debatable, but it's scathing when she adds it to the argument), and even brings up the rape incident from years ago. I had thought that Joan just smoothed over that incident in her mind given that she stayed married to this contemptible jerk, but she remembers it all. He walks out in a huff, and she's left feeling like there's hope now that he's completely out of her life. She's lived through her nightmare and come out safe on the other side. Dreams and nightmares come and go. They might seem scary at first, but in the end, you'll always wake up and go on with your life.