This has been a rather disappointing and troublesome season of "Merlin". Despite obvious efforts to move the show in a new direction and build upon past strengths, this season has been nowhere near the improvement that I hoped it would be. Chief among the show's many flaws is its inability to properly integrate the serialized storytelling into its episodic structure. With so much of the season having underwhelmed me, I pinned the remainder of my hopes on the finale, knowing that the premieres and the finales tended to be stronger than most episodes.
Unfortunately, the second part of "The Sword in the Stone" is yet another disappointment. If this were an episode from anywhere in the middle of the season, I'd probably think of it as reasonably good episode. But as a finale, it's merely serviceable. Perhaps its gravest fault is that it offers absolutely no surprises (except for that final, brief scene). It accomplishes what is expected from a finale, giving us the dramatic final battle to take back Camelot and defeat Morgana and her allies. The build-up and the resolution is all reasonably effective, but it's all so boringly predictable.

Actually, there was one genuinely surprising moment in the finale. It's not at all a surprise that Agravaine died, but I found his exit from the show to be one of the more unexpectedly disappointing, poorly-handled aspects of the finale. It's ridiculous for Merlin to suddenly decide to openly display his powers in order to defeat Agravaine. Considering the extreme lengths to which the writers will usually go to avoid such a situation, it comes off as a highly unbelievable and overly convenient way of getting rid of Agravaine. (Normally, Merlin would have caused a rock collapse or something else that couldn't have been attributed to him.) And it simply makes for an extremely underwhelming death for such a major antagonist. 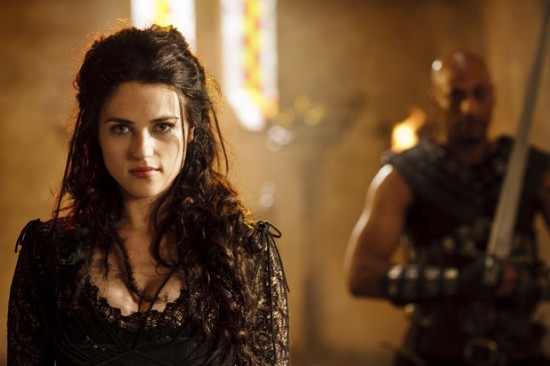 Maybe if it had added to the character of Merlin in some way, like showcased how Merlin is now willing to murder his enemies in cold blood to protect Arthur, or perhaps showed us how much more powerful Merlin has become, it would have been more forgivable. But we can be almost certain that this is not intended to make us see Merlin in a different light, since his killing of Agravaine was basically self-defense, and anyone who saw him use his powers is now dead. It might have also helped if there had been more build-up to this moment that gave us a better understanding of why Merlin was left with no choice and had to do something desperate.

Now here's a question for you. Why is it that the "Sword in the Stone" story resonates with us so strongly? Is it because Arthur pulled the sword from a rock? Or is it because Arthur succeeded at something where so many others had failed? I would argue that it is the latter, which explains why this episode's take on the story fails to live up to the inherent potential. It's tough when Merlin has to single-handedly establish the entire legend in only a couple of minutes with some verbal exposition. It kind of robs the moment of its impact when no one has even heard of this sword before. It would have been infinitely smarter to start including the sword early on in the season, but I guess it's too much to expect the writers/showrunners to actually plan ahead.

The assault on Camelot sure could have used some unexpected complications. We did get a character death, but again, it was too predictable. I fully expected the Tristan and Isolde story to end in tragedy. Once Tristan and Isolde were introduced, it was pretty much a given that they would be at Arthur's side when he takes back Camelot. And there were bound to be consequences for that decision. The actors sell the romance and the tragedy of it all quite well. But, unfortunately, this death lacks the impact it would have had if we'd had more time to actually get to know the characters.

This whole scenario--the way it plays out and the way its resolved--feels awfully similar to the previous season finale. Morgana takes over Camelot. Our heroes dramatically take it back. There's even a rather funny subversion of a moment in the previous finale when Arthur shouts "For the love of Camelot!", before they all rush into the room to confront the expected army of soldiers, only to find Morgana and Helios calmly awaiting them, with no extra protection. This was a good moment of self-awareness, and I wish that the writers had extended that same level of self-awareness to their writing for the rest to the finale.

In the end, Arthur and Gwen are married, becoming King and Queen of Camelot, and Arthur now has a renewed sense of confidence. I like these changes, but they just don't feel like enough to totally support the season. The final scene with Aithusa (that albino Dragon from earlier in the season) is interesting, and a decent piece of set-up for the next season, but it's just too little, too late. Both the finale, and the season as a whole, needed to accomplish a lot more to justify its existence, especially given that Lancelot and Uther were both killed off so early on. If you ask me, the best thing for "Merlin" to do right now is to set an end-date for the series, so the writers might be forced to plan a well-paced closing story arc.