SciFi Vision | All Reviews | Television Reviews | Once Upon a Time 1.17 Review: "Hat Trick"

In the later, more megalomaniacal, phase of his career, Robert Heinlein championed the concept of the World as Myth. He held that the act of creating fictional worlds is so powerful that all of those worlds including, of course, his own, actually exist as parallel universes to our own. It allowed the characters of his last novels to spend time in Baum's Oz, Burrough's Barsoom, and, most notably for our purposes, Carroll's Wonderland. While it may have been the final hubristic spasm of a Grand Master, it is a concept that proves useful to the writers of “Once Upon A Time” in “Hat Trick”.
But before we get to Wonderland, it’s time for the real ladies of Storybrooke to traipse around the woods. Mary Margaret had assessed her chances with Emma as her champion last episode, and wisely decided to high-tail it out of there. Emma takes off after her, and almost runs down a new striking stranger on the road. Which gives us yet another situation where not only does her truth-sense abandon her, but also the sensible caution any modern young woman, especially a sheriff and ex-bounty hunter, would display when confronted with a strange man at night. But no, Emma walks right into his tea-and-honey trap. As did, we soon discover, Mary Margaret.

To give credit where it’s due, Emma does show some guile with her tea-cup assisted escape. And that’s really where my quibbles end. Because once they got past the “I’m really not the scissor-wielding psycho who really offed Kathryn” part, the episode took off. A trip to his workshop reveals he is, as suspected, actually a Mad Hatter. And like the original, one who talks in circles and questions that are surprisingly lucid and relevant. 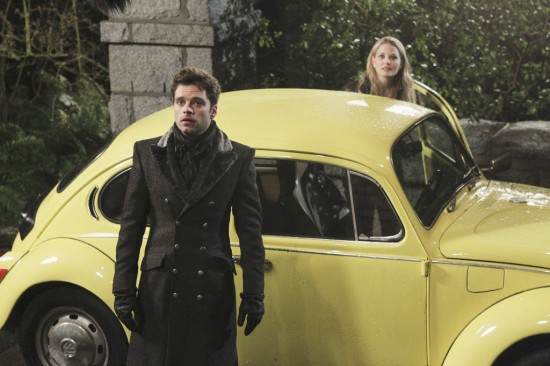 In this version, the Hatter is Jefferson, a misbegotten father, driven to his obsession by circumstance. Circumstances ably aided and abetted by the Evil Queen, who has added the persuasive powers of extreme cleavage to her arsenal. There are hints of their past association. Certainly, given the revenge the Queen of Hearts was attempting to exact, this wasn’t Regina’s first foray into Wonderland. One wonders what she took to provoke her rival queen’s response.

Having established the parallel realm of the Enchanted Forest, and its Brothers Grimm-based denizens, we now find Wonderland placed parallel to the Forest. The little hints strewn about, the stuffed White Rabbit, the distinctive hat-box, the hat creating a rabbit-hole-like portal, were nicely done. Wonderland itself is rendered in a more cartoonish style than the Forest, in keeping with its more extreme characters. That said, the much-hyped, then heavily disguised Roger Daltrey cameo was just silly, however appropriate the line. (He was the Caterpillar, in case you missed it.)

The trip to Wonderland also marks the welcome return of darker story lines. These are fairy tales with real consequences, just like the original Grimm tales. Jefferson winds up used and abused, to the point of looking down on his decapitated body. In the end, the cost of one last fling with Regina is his daughter, and an endless search to regain the magic of the hat.

Regina is deliciously ruthless in rescuing her father. Using the mushroom to restore him was another nice appropriation. The irony of going to such lengths to get him back, only to sacrifice him later for the curse, looms large. Her retort that, if Jefferson really wanted to protect his daughter, he never would have left her, speaks of more back story to come.

But, for all the entertaining shenanigans in Wonderland, it is back in Storybrooke that Jefferson really proves his worth. He mounts the most effective challenge to Emma’s skepticism yet. Emma may have played along until she found an opening, but I think her resolve is starting to crack.

Jefferson also builds the worlds in play with terms that strongly recall Heinlein’s exegesis of the World as Myth. Who’s to say why a fiction book is any less real than a history? But, for all the confirmations he brings, his presence raises just as many questions. Was he the only one plucked from Wonderland by the curse, or are there other Lewis Carroll creations inhabiting Storybrooke? Why is he so intent on restoring the hat? He doesn’t need it to get back to Grace/Paige now. Are there others left behind that he can recruit and bring back for a battle royale of Author’s Armies? Did he get cursed with remembering just for torture when he sees his daughter? Or does his portal navigating ability give him special sight? And finally, did Emma’s hat work? The technique of answering questions, only to pose even more, is a familiar one from “Lost”. It’s another sign that the show has returned to its strongest roots.